Does it seem as though 2020 is entering into its third year? Are you already looking forward to 2023? Poor 2022! As the sun rises on the new year, usually a time of hope and of refocusing on personal goals, the promise of an end to the pandemic and a return to normalcy seem to be as far away as ever. Truly, it's been a long stretch and many of us have struggled through it by quietly numbing ourselves with alcohol. And no wonder! It's inexpensive, easy to get, and allows for a temporary escape from the madness that surrounds us.

It's also ubiquitous. Alcohol is so ingrained in our culture that we even begin the new year by popping the bubbly and singingAuld Lang Syne, a song urging us to raise a pint. During this time of renewal, many are realizing that they've been drinking alcohol more than they care to admit and that it is not a viable way to cope with the coming year.

Even before the pandemic, in "The Before Times," many partook of the trend of "Dry January," taking a month off from alcohol consumption. The hope, for some, is that a month of "detoxification" might minimize the toxic effects of alcohol and reverse any liver damage they have. For others, it is also a way to prove to themselves that they are not guilty of alcohol abuse.

Whether you are just taking a break from alcohol consumption or facing alcoholic liver disease/cirrhosis from chronic ethanol use, glutathione is a biochemical weapon you want on your side.

Glutathione is a peptide (a very small protein) comprised largely of three amino acids: glutamine, glycine, and cysteine. Glutathione exists in cells in two states: reduced (GSH) and oxidized (GSSG). It is a powerful antioxidant and is involved in many of the body's functions at the cellular level. Glutathione is involved with:

This last item is of the highest importance. Free radicals are atoms that contain an unpaired electron and so are in a constant search for another electron to stabilize themselves with. They are a natural byproduct of metabolism or caused by exposure to toxins in the environment such as tobacco smoke, UV light, and alcohol. They're not fussy and will grab any available electron from any nearby atom, causing oxidative damage to that atom/molecule. If that molecule happens to be DNA, the resulting mutation can lead to cancer. 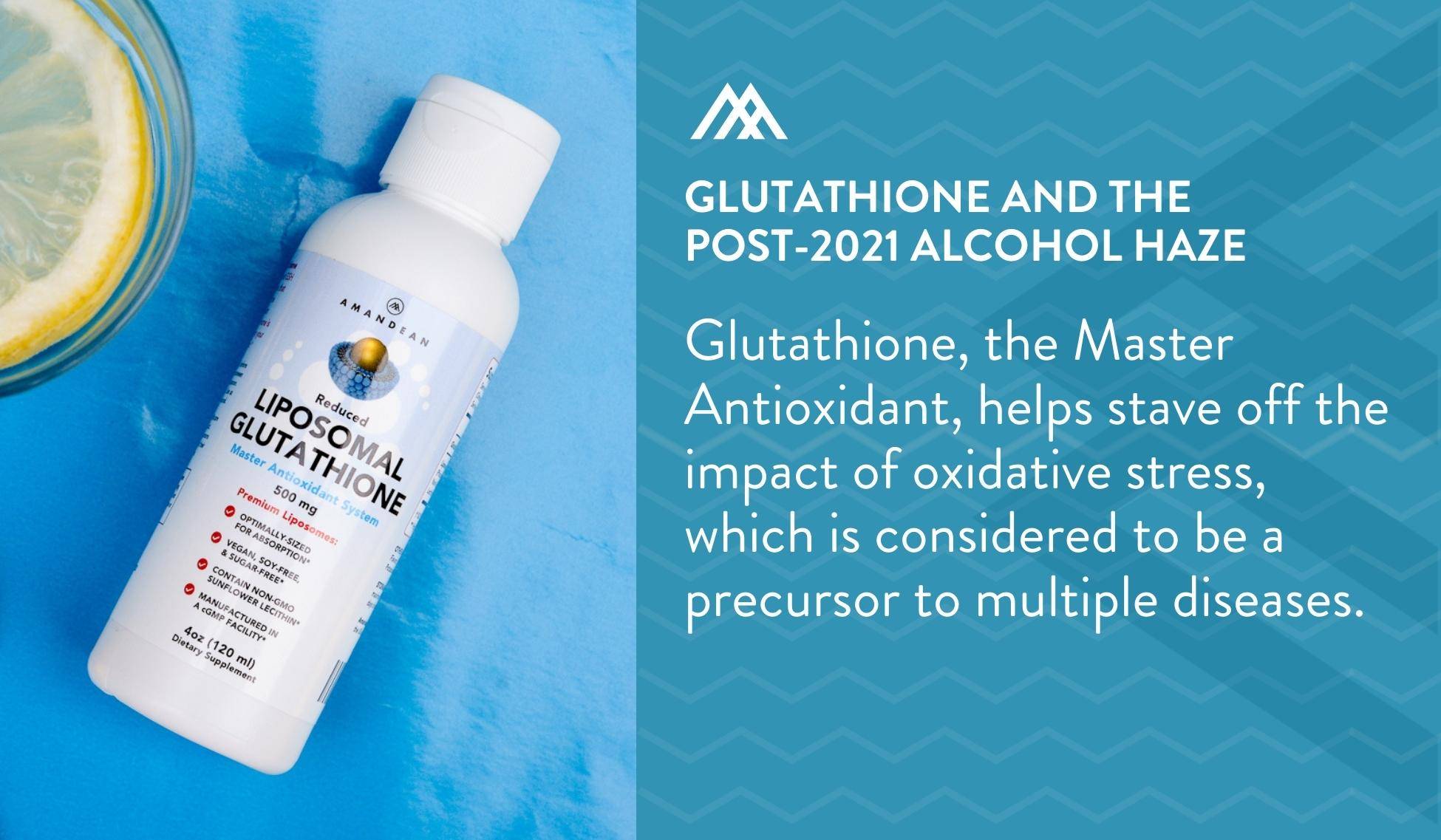 A PubMed (NIH) article regarding theeffect of alcohol abuse and glutathione treatment states that "Glutathione (GSH) is a principal cellular scavenger of free radicals. Chronic alcohol abuse... induces a decrease of hepatic GSH." So alcohol consumption leads to a depletion ofglutathione levels in the liver where, ironically, glutathione is made and can lead to liver damage.

Exacerbating this issue is that one of the metabolites of alcohol metabolism is acetaldehyde. Acetaldehyde is found naturally in milk, fruit juice, ripe fruits, and cheese. However, when you drink alcohol, a lot of acetaldehyde enters your blood, damaging your membranes and possibly causing scar tissue. It can cause a faster heartbeat, a headache, an upset stomach, and can also cause hangover symptoms. The brain is most affected by acetaldehyde poisoning. It causes problems with brain activity and can impair memory. High levels of acetaldehyde can cause amnesia, which is why someone can wake up the day after a night of heavy drinking and wonder, "What happened last night."

When ethanol intake is high, alcohol dehydrogenase activity is insufficient to process the amount of acetaldehyde that accumulates, which can lead to acetaldehyde buildup in the liver. As acetaldehyde levels rise, glutathione levels decrease because the acetaldehyde can bind to glutathione. And since glutathione is largely involved with removing toxins from cells, a decrease in GSH levels is not good. 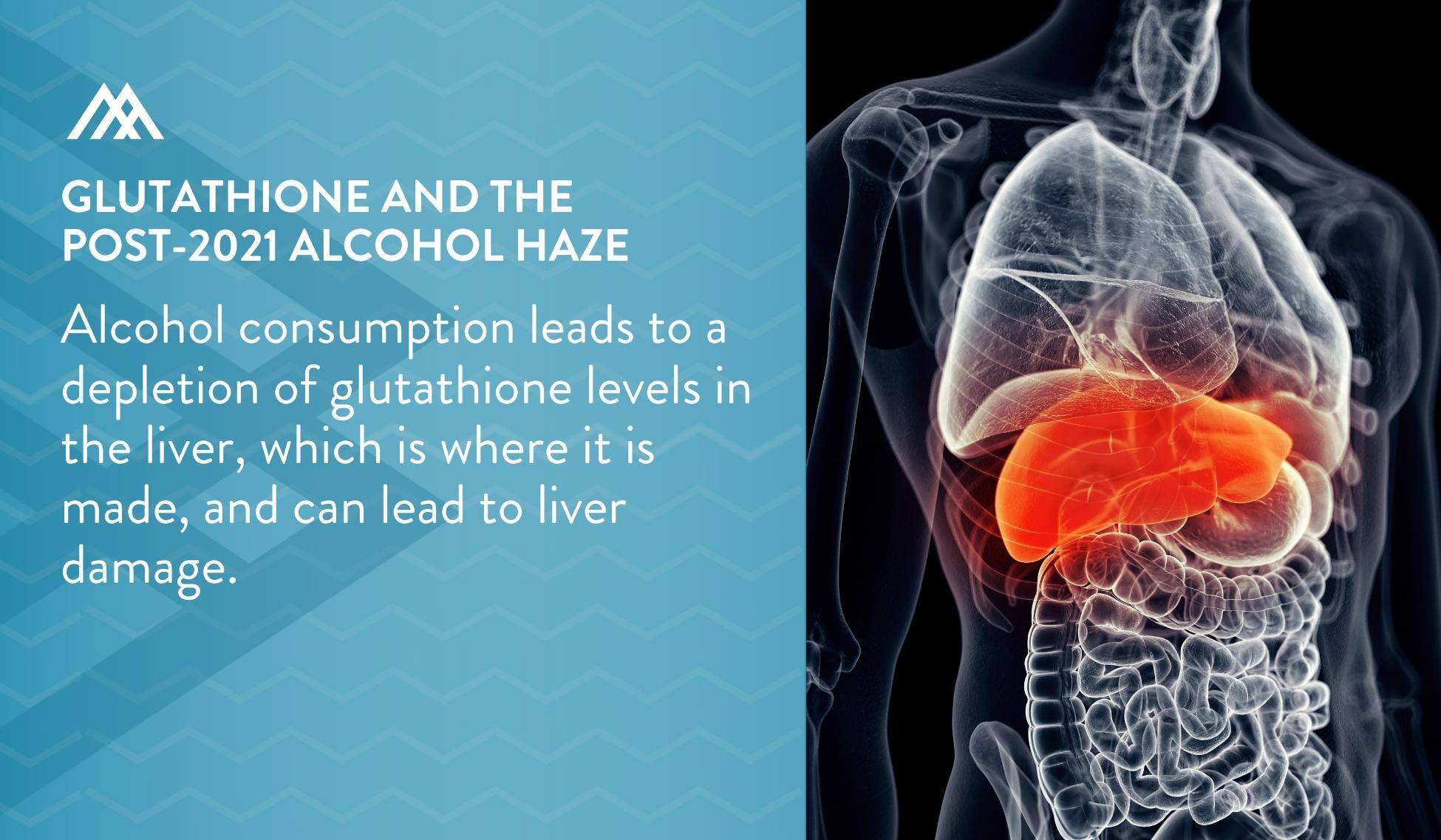 The highly reactive acetaldehyde is actually much more toxic to your brain than the alcohol itself. Hangover symptoms can be prevented or significantly reduced if you help your body get rid of the acetaldehyde. Hangover symptoms are caused when your liver enzymes and antioxidants try to detoxify and eliminate it, but cannot keep up. You can help your liver by supporting your body's natural detoxification process. One way to decrease acetaldehyde toxicity is by increasing glutathione, your body’s master antioxidant. 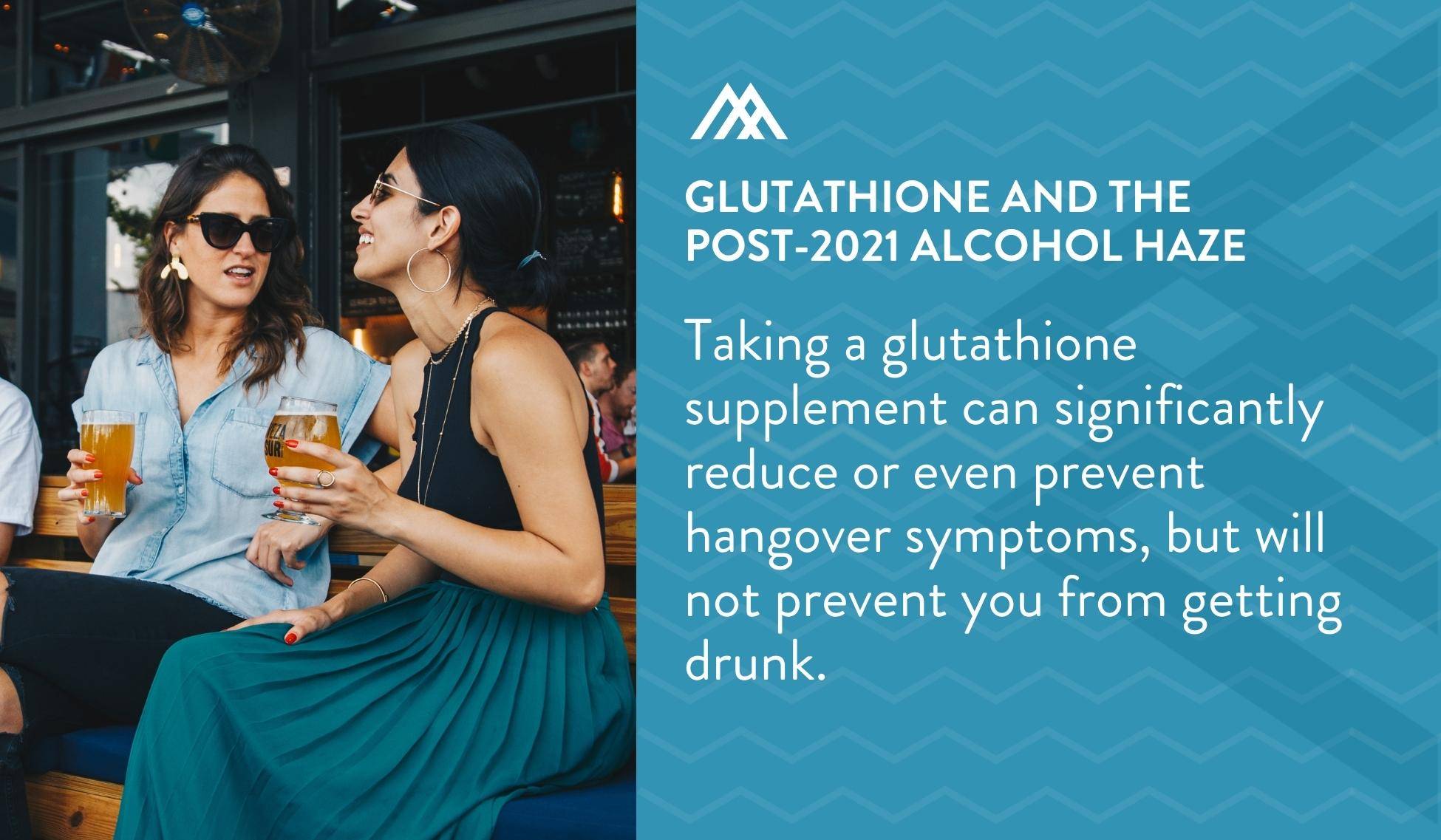 Since regular alcohol exposure depletes glutathione, taking a glutathione supplement makes sense. However, some studies suggest that glutathione might not survive the acidity of the stomach. That's where "liposomal" glutathione comes in. A liposomal preparation contains the active substance inside very tiny, fat-like particles. This form is easier for the body to absorb and allows more drug to get to the target area of the body.

Another way you can increase glutathione levels is by taking n-acetylcysteine (NAC) and vitamin C together. NAC is a precursor to glutathione. Understand that taking glutathione, NAC, and vitamin C before or during alcohol consumption does not prevent you from getting drunk. It simply decreases alcohol toxicity and that nasty hangover the next day.

And last but not least don’t forget to hydrate. The tissue around your brain is made up of water. So as you drink, and you lose water, the tissues around your brain start to shrink. This leads to pressure around your head that can contribute to headaches, fatigue, and dizziness, so drink an equal amount of water for every alcoholic drink you consume. And, of course, please drink responsibly!

Glutathione is readily found in certain foods, such as fruits and vegetables. A study published in Nutrition and Cancer found that dairy products, cereals, and breads are generally low in GSH. Fruits and vegetables have moderate to high amounts of GSH, and freshly prepared meats are relatively high in GSH.

If you want to boost levels of glutathione in your body, you’ll want to opt for food high in precursor nutrients that help it form, such as N-acetylcysteine (NAC). To create glutathione, NAC bonds with two other amino acids: glutamine and glycine. Besides meat and dairy, common food sources are cruciferous vegetables or sulfur-rich foods: 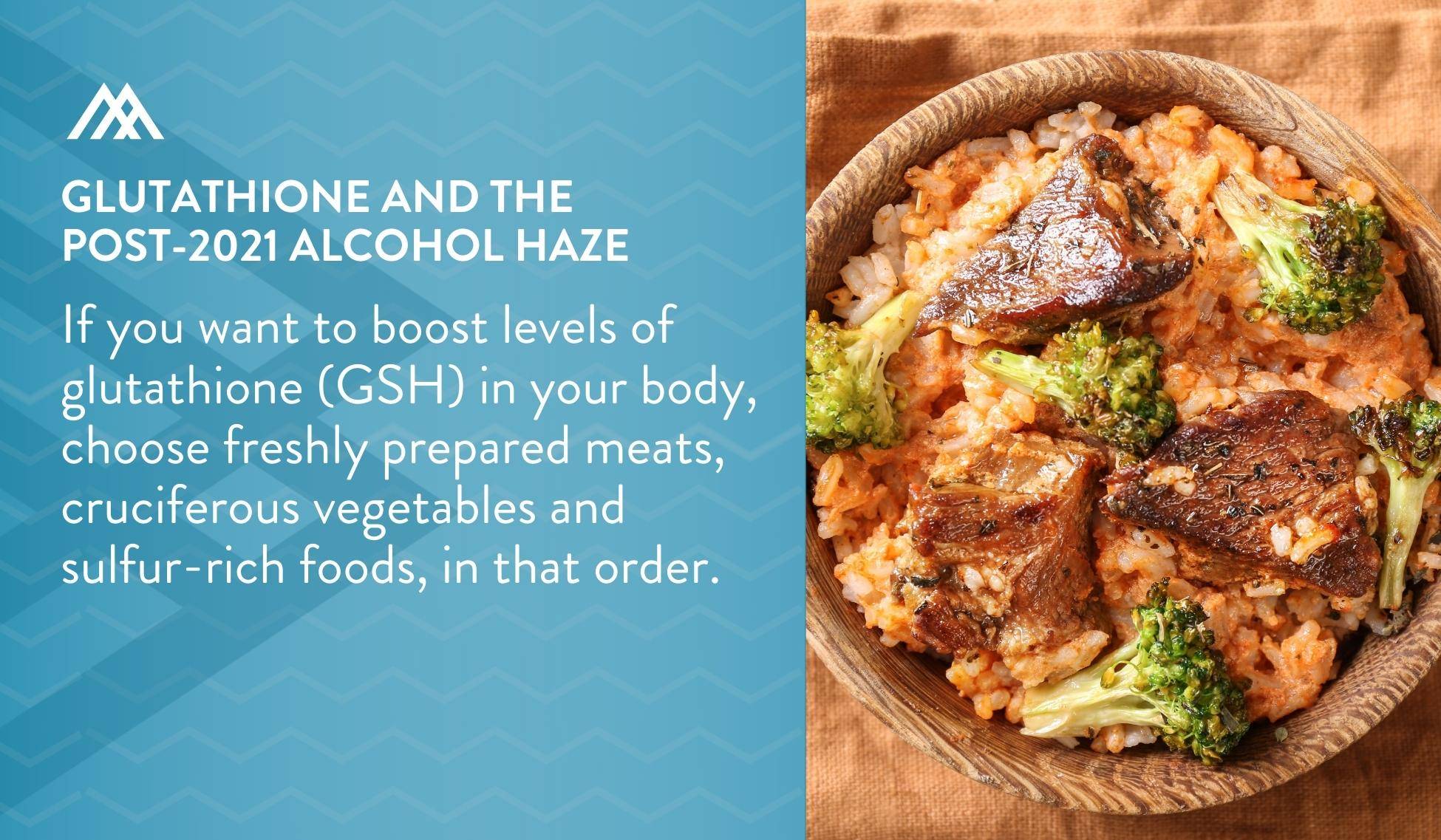 Amandean'sLiposomal Glutathione supplement is a vegan-friendly, 100% natural, high-bioavailability formula containing the body's master antioxidant. It supports your immune system in doing its job of fighting infections, while supporting detoxification of the liver. It fights those nasty free radicals I discussed earlier and promotes vital brain functions including mental focus, concentration, clarity, and long-term memory. This powerful antioxidant helps to detox your entire body and boost energy from the inside-out!

Cysteine is one of the amino acids in glutathione. N-acetylcysteine, NAC, is the supplement form of cysteine and NAC supplements are widely available. However, any foods high in cysteine will help increase glutathione levels. Cysteine is found in most high-protein foods, such as chicken, turkey, yogurt, cheese, eggs, sunflower seeds and legumes. 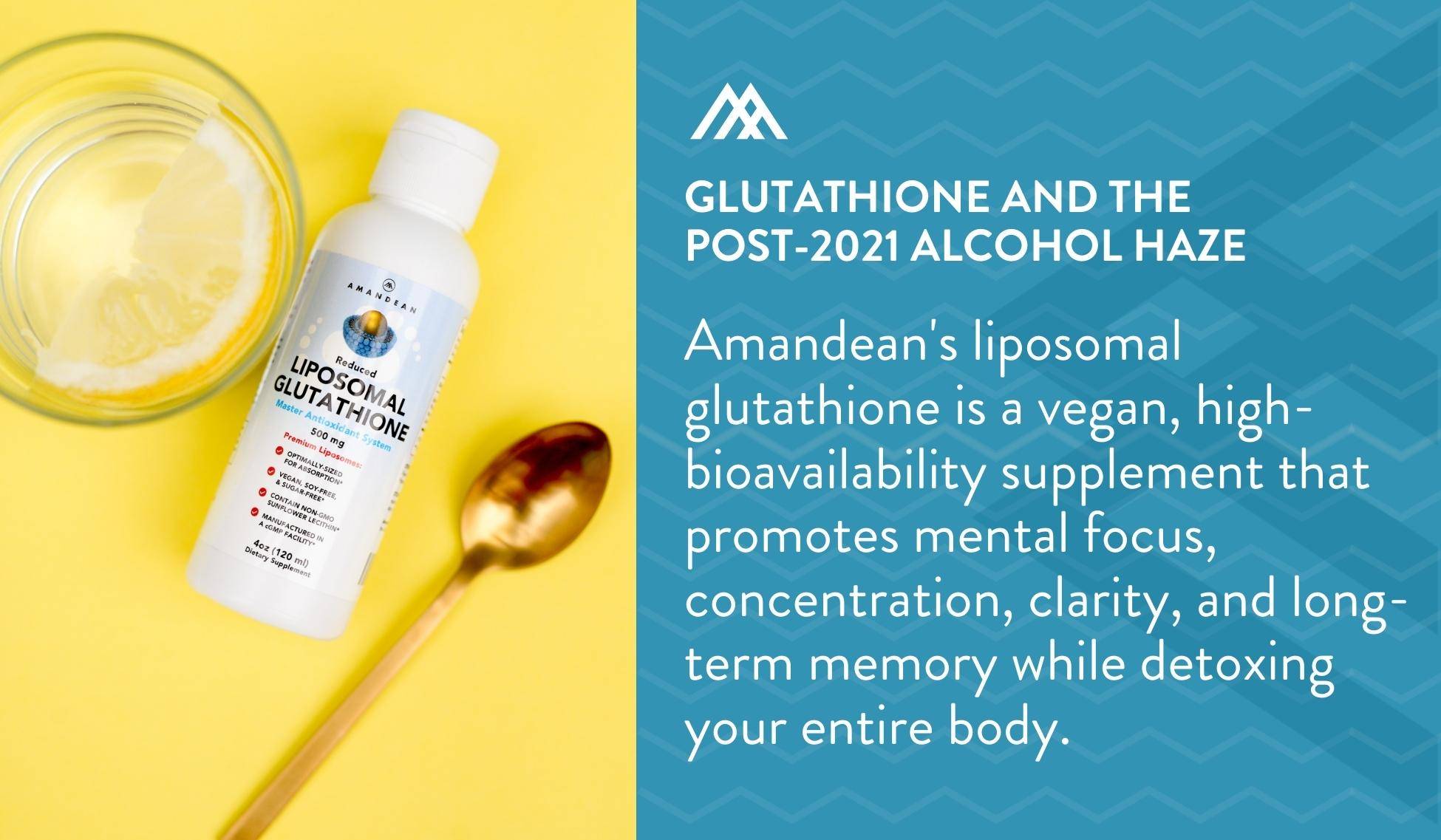 In this blog, I've tried to be careful not to appear to be wagging my finger at anyone for their drinking. However, I said in the beginning, many have woken up in 2022 realizing that they may have been using alcohol to numb the effects of the last couple of years. If upon reflection, you think you may have been seriously overdoing it, there are tests your healthcare provider can run to check for liver damage. He or she may prescribe a glutathione supplement or even an IV treatment containing glutathione.

If, on the other hand, you overdid it a bit to survive the holidays, consider doing a "Dry January" and boosting your liver and overall health with a glutathione rich diet, collagen peptides supplement, an NAC supplement, or our liposomal glutathione supplement.

May the year 2022 smile upon you and see our return to some semblance of normalcy. I know I could use it and I'm sure you could too!