Oh, the neverending battle with aging! It is pretty clear that we can’t escape the passing of time, but the beauty industry has certainly developed a trick or two when it comes to concealing and postponing its effects. One of the most widely-adopted methods when it comes to combating the appearance of skin aging in the last decade has been the use of Botox. Botox, if you’re not familiar, basically stops the formation of wrinkles by preventing muscle contractions in areas where it is injected. And...while botox is effective at keeping crows feet and fine lines at bay, it does come with an expiration date, calling for yet another appointment.

Whether you're a seasoned fan of Botox or you’re skeptical about trying a procedure that involves needles in the face, you’d probably be interested to know that investing in Botox can last a whole lot longer with a few simple tricks. The secret lies in the composition of the skin, which represents the key factor in the successful application and management of every single skin treatment. And when talking about skin composition, there’s one association that comes to mind instantly - collagen.

Though we don’t really require a confirmation from science, a study conducted by S. H. Lim and colleagues suggests that signs of aging, such as wrinkles, have been shown to negatively impact the quality of life, especially self-esteem. Also, a widespread, yet utterly inaccurate assumption that these concerns affect only the female population can be completely disregarded. Botox is, by far, the most preferred anti-aging procedure among both men and women, due to its high efficiency. 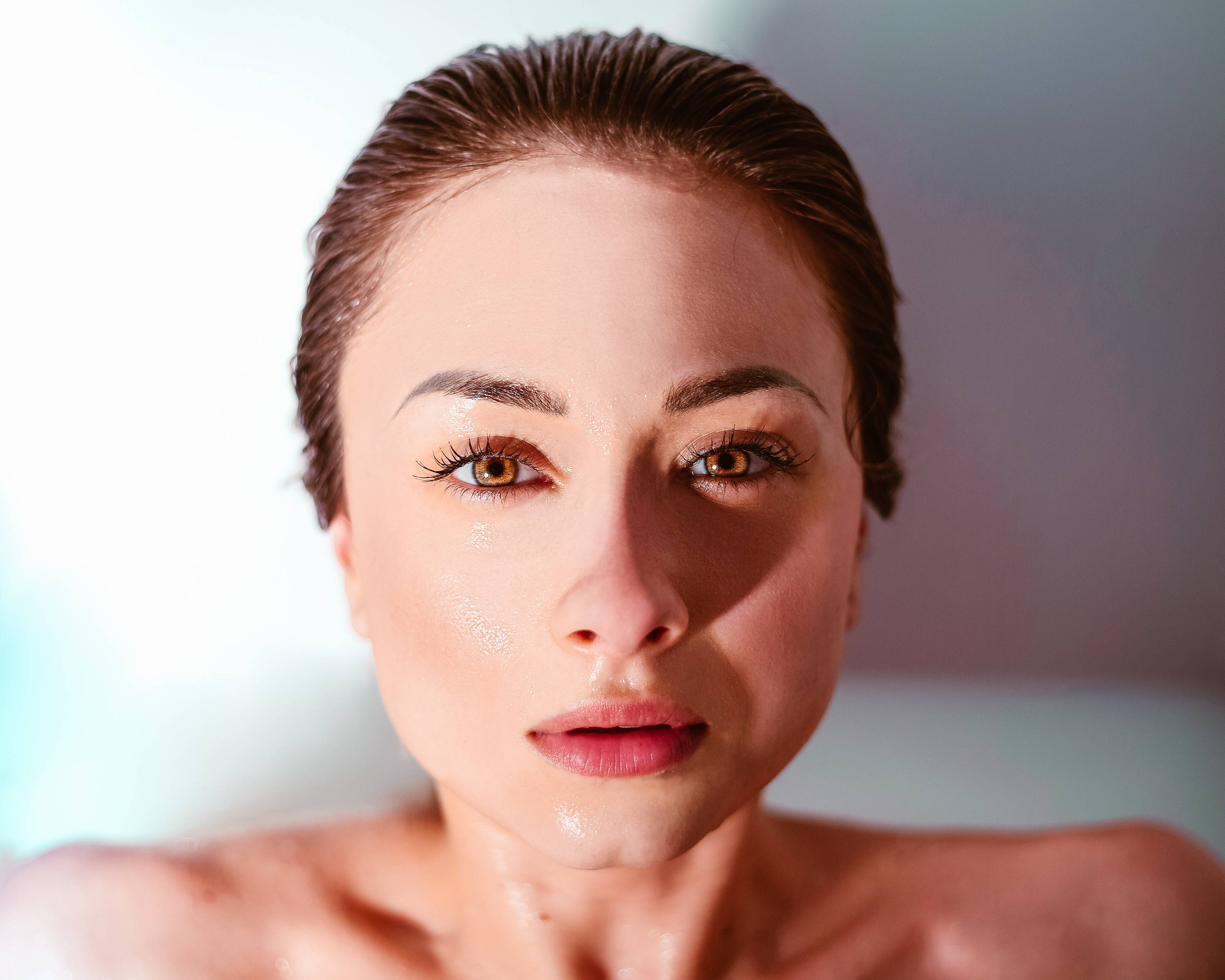 Botox is a neurotoxin produced from the bacterium Clostridium botulinum, also known as Xeomin. Although it is primarily a toxin, when used properly and in a small dose its toxicity is not considered threatening. The use of botox for medical purposes has been FDA-approved since the 1980s, as it has been used in the treatment of ailment conditions such as lazy eye and uncontrolled blinking. It was in April of 2002 that FDA approved of yet another use of botox - this time for aesthetic purposes. Even though the initial aesthetic use of botox was limited to the glabellar lines (between the brows), today we’re witnessing the expansion of botox use to pretty much every single area of the face.

So, how does botox work and what is the secret behind its ever-growing popularity? Botox has the ability to paralyze the muscle temporarily by interrupting the nerve signaling process which triggers muscle contraction. Here’s how it happens: for muscles to contract, nerves must release a chemical called acetylcholine at the meeting point of nerve endings and muscles. The role of botox injections is in stopping the release of acetylcholine which would bind to the receptors of the muscle cells and cause the muscle to contract - hence the muscle paralysis.

Besides the aforementioned glabellar lines, some of the most common areas treated with botox include the forehead, the area around the eyes, lines around the mouth (the so-called “smile lines”), as well as the chin. However, there are reported cases of botox treatments used to improve the appearance of hair. As far as the duration of the effect botox produces is concerned, it typically lasts for 3-6 months, depending on the area of application, as well as the treatment. Now, for those of you who aren’t particularly thrilled about going back for more injections more often than is truly needed, the good news is that the effects of botox can be boosted and prolonged by proper skincare nutrition, includinganti-agingcollagen.

How Does Marine Collagen Prolong Botox? 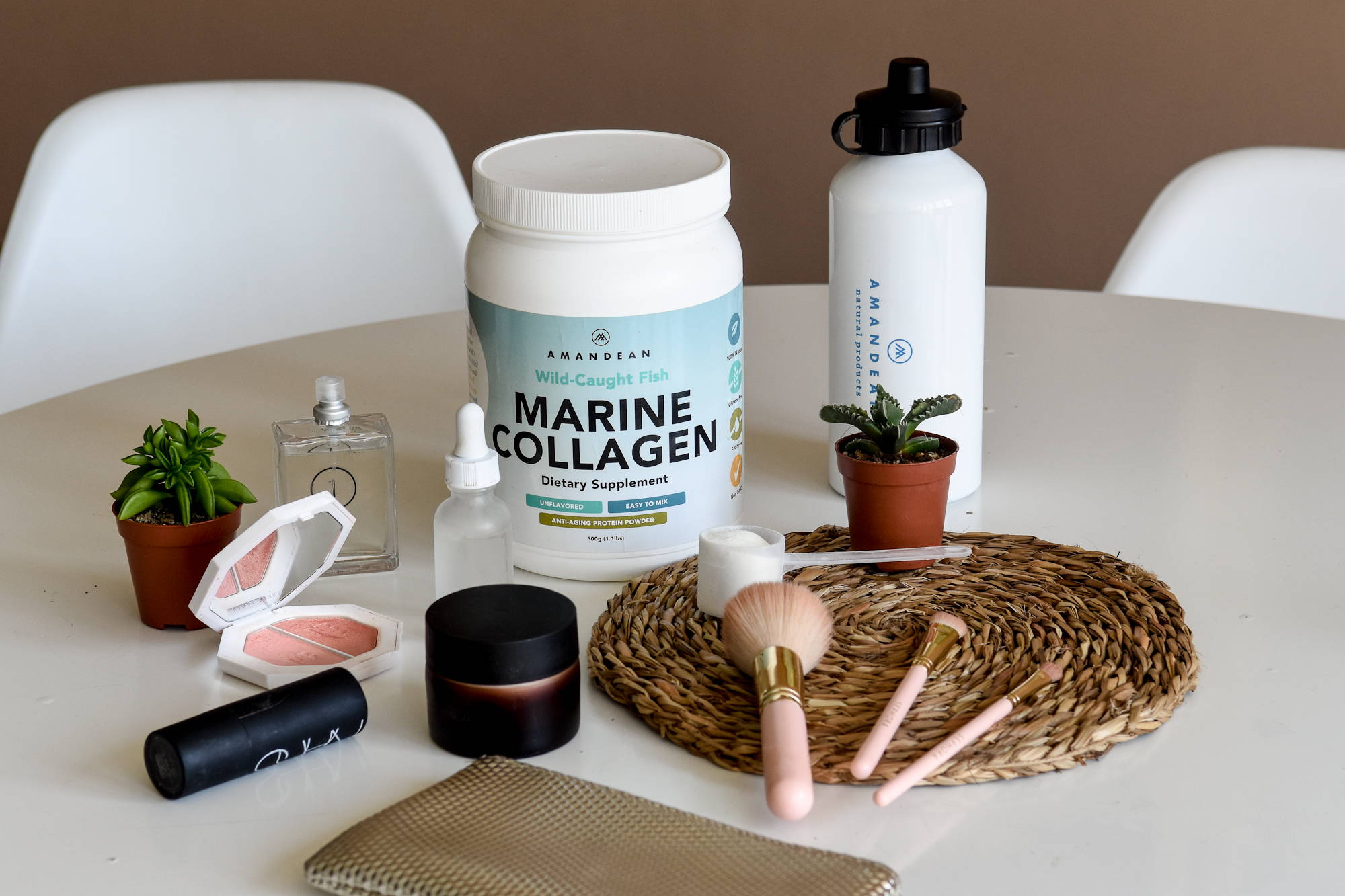 Instead of going back for new botox treatments more and more frequently with age, what you could do is aid your skin in preserving its effects for as long as possible. This way, you’ll be able to get more value from your treatments and stretch out the frequency of your injections by improving the composition of your skin with anti-aging Marine Collagen supplementation.

Why do we favor oral supplementation over topical skincare? While we are not by any means ignoring the importance of cosmetic applications, when it comes to reaching the deeper layers of skin, the key is in bioavailability, which represents the amount of the nutrient absorbed and ready for the cells to utilize. According to a study conducted by M. Borumand et al, orally consumed hydrolyzed collagen has been found in the blood of those consuming it, which means that hydrolyzed collagen can cross the intestinal barrier and be available for cells in need.

One of the main motives for people wanting to undergo a botox procedure in the first place is skin wrinkling. According to a study conducted by S. H. Lim et al, botox is one of the most effective treatments against facial lines or expression wrinkles. On the other hand, a study focused on the benefits of oral collagen supplementation on skin health suggests that supplementing with a collagen peptide supplement has been shown to promote skin elasticity, moisture, and evaporation. Furthermore, a study conducted by M. Borumand and colleagues highlights the role of all-natural collagen supplementation in the promotion of collagen density and skin firmness. 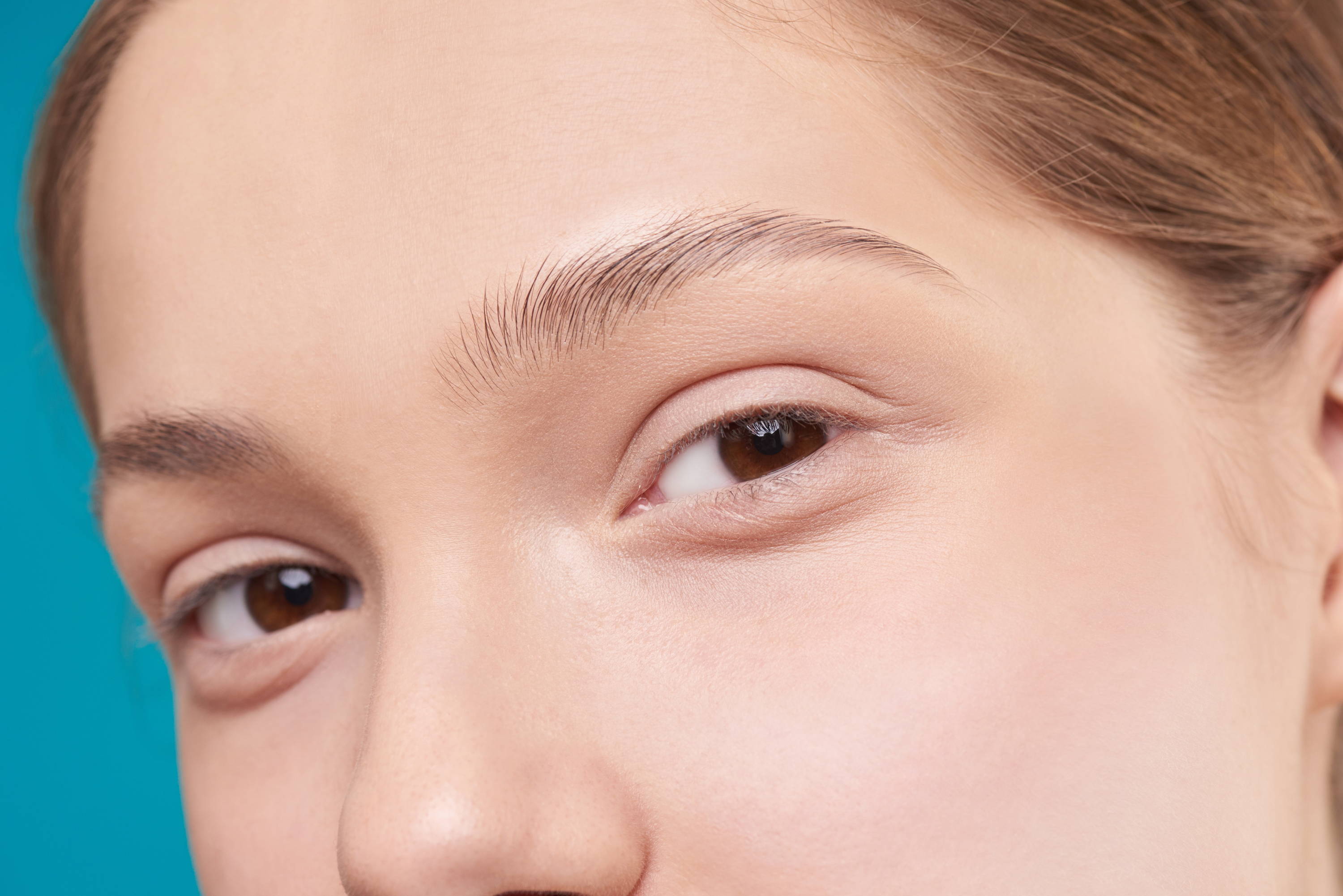 A study titled “Skin anti-aging strategies”suggests that the importance of collagen supplements in skin health and appearance, especially their anti-aging and wrinkle-decreasing effect, lies in their ability to promote natural collagen production.

But why do we insist on collagen as much when it comes to skin quality? This fibrous protein is not only the most abundant protein in humans, but it also accounts for a jaw-dropping three-quarters of the dry weight of our skin - which makes it the main component of the skin.

Given its vital role in skin structure, it is no surprise that collagen is also responsible for the formation of new skin cells. Collagen promotes the formation of fibroblasts while also aiding in the process of replacement of old cells. Furthermore, when it comes to aged skin, clinical changes in collagen content have been noted. What this means is that there is a clear connection between skin aging and collagen degradation, which is precisely why supplementing with non-GMO Marine Collagenmay be one of the most efficient anti-aging techniques. 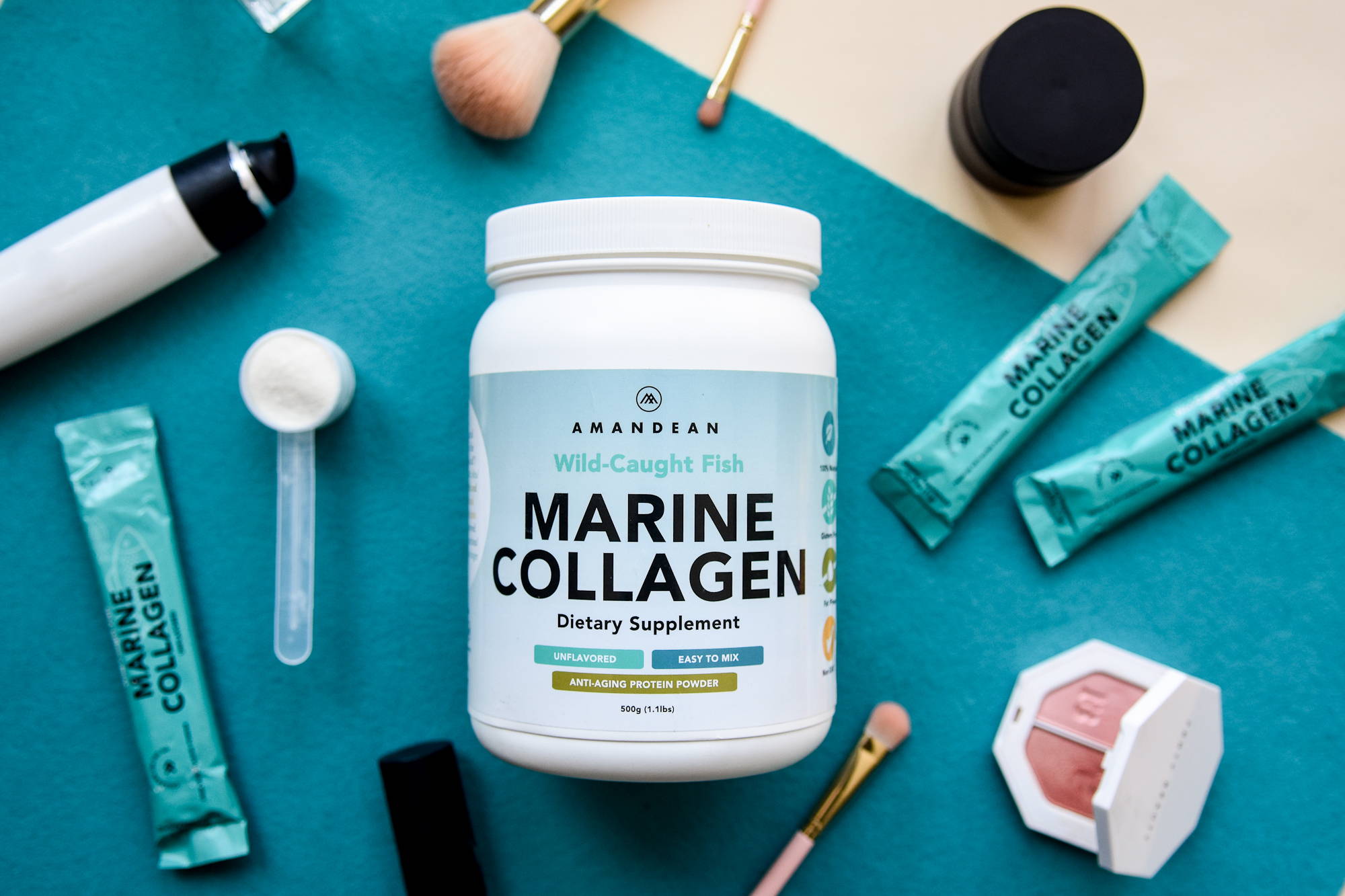 Nurturing the youthfulness of your skin from the inside out is, without a doubt, the most efficient treatment. With consistent collagen supplementation, you’re improving the hydration, elasticity, and texture of your skin. And by taking care of all those factors, you are prolonging the beneficial effects of botox, as well. For more all-natural supplements, make sure to check out our online store.