The word "vegan”, a contraction of the word "vegetarian", first appeared in 1944. Essentially, vegans only eat or use products that have plant sources, avoiding products that come from animals, either directly or indirectly. Vegetarian diets do not include meat, but vegans also eschew things like milk and eggs even though their production does not kill the animal. Most vegans also avoid non-food, animal products as well, like wool and silk.

Some vegans are stricter than others, "drawing the line" at different places. For example, honey is a grey area as it is technically an animal-produced product because it comes from bees. In addition, there are many hidden, non-vegan ingredients in products which some vegans work to avoid, while others don't. For instance, some producers of cane sugar use bone char to whiten the final product, and some beer and wine are clarified using isinglass, a substance obtained from the dried swim bladders of fish.

If you are reading this out of concern for a friend or family member, rest easy. Everything a person needs is easily obtained on a vegan diet. The question most often heard is: "But where do they get their protein?" This fear of protein deficiency is a result of heavy advertising from the meat industry. Beans, legumes, nuts, and vegetables have all the protein and, more importantly, all the essential amino acids the body needs. As proof, there are professional bodybuilders who follow a vegan diet!

Additionally, research by The Physician's Committee for Responsible Medicine shows diets focused on plant foods are naturally high in fiber, low in saturated fat, and rich in phytochemicals which help prevent many serious diseases. In fact, results show a plant-based diet can prevent and reverse type 2 diabetes and may also reduce the risk of heart disease, high blood pressure, osteoporosis, and reduce one's chances of developing cancer by a staggering 40%.

The next time you're bored at a dinner party, casually mention you wonder if you're getting enough cobalt in your diet! Besides being a fun word to say, it is regarded as an "ultra-trace mineral." Cobalt is one of the 108 (or so) atoms that make up the universe and is number 27 on the periodic table. However, there's no need for you to check your multivitamin's cobalt content because it is one of the atoms in the B12 molecule. In fact, vitamin B12 really refers to a group of closely related molecules called "cobalamins," because of the inclusion of cobalt in their structure. Interestingly, this is the only known biological purpose of the element cobalt. In other words, if you're getting enough vitamin B12, you're getting enough cobalt! 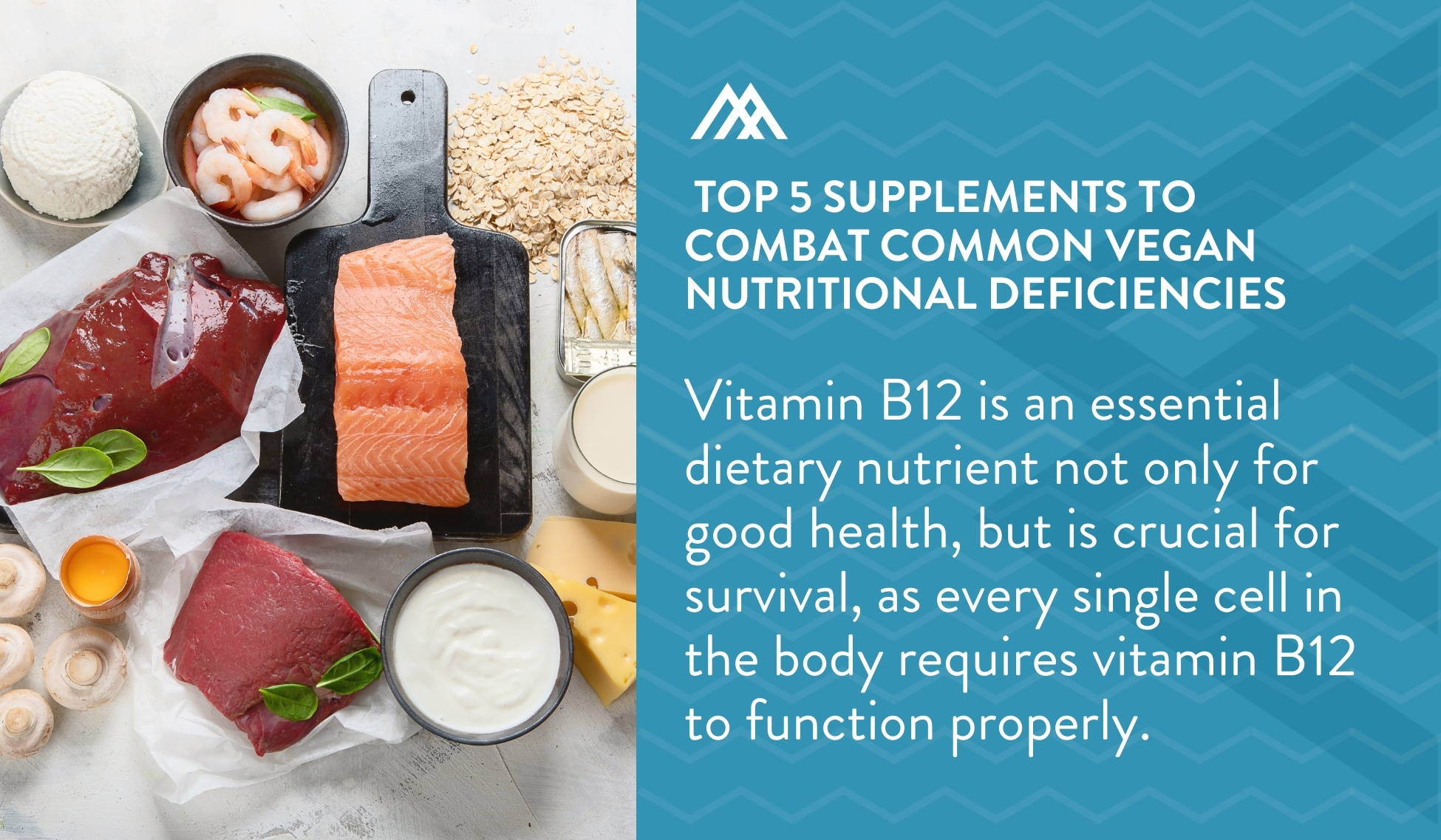 As mentioned above, vitamin B12 is an essential dietary nutrient for good health. It’s actually crucial for survival as every single cell in the body requires vitamin B12 to function properly. We need it to make fatty acids, amino acids, red blood cells, and to replicate and repair DNA. The nervous system is especially dependent on B12 because many fatty acids are used to make myelin, the sheaths that wrap our neurons and nerve bundles.

According to an article from The Vegan Society, vitamin B12 deficiency can cause anemia and nervous system damage. The tiredness one feels when deficient in B12 is caused by a condition known as macrocytic anemia. When cells divide, they need to synthesize DNA. The stem cells in our bone marrow that generate blood cells are among the most actively dividing cells in the body. So when DNA synthesis is impaired by lack of vitamin B12, it impairs our ability to make enough red blood cells. When we experience a drop in red blood cells, it saps our energy and weakens our immune system. This condition is very serious if it continues for too long.

According to an article on Britain's National Health Institute website, if you have anemia caused by a vitamin B12 deficiency, besides fatigue, you may have other symptoms, such as:

Sources of Vitamin B12

In nature, the great apes get their B12 by accidentally or indirectly eating dirt, bugs, or feces. This is because vitamin B12 is excreted by bacteria that live in the soil or the guts of animals. Vitamin B12, whether in supplements, fortified foods, or animal products, comes from these microorganisms. Since you aren’t likely to eat dirt, bugs, or especially feces, you must supplement your diet with vitamin B12.

The only reliable vegan sources of vitamin B12 are foods fortified with B12 including:

Most vegans consume enough B12 to avoid anemia and nervous system damage, but many do not get enough to minimize the potential risk of heart disease or pregnancy complications. There are many multivitamins with vegan sources of vitamin B12 available.

To get the full benefit of a vegan diet, vegans should do one of the following:

Be sure to consult your healthcare provider if you are concerned about your or a loved one's vitamin B12 intake. 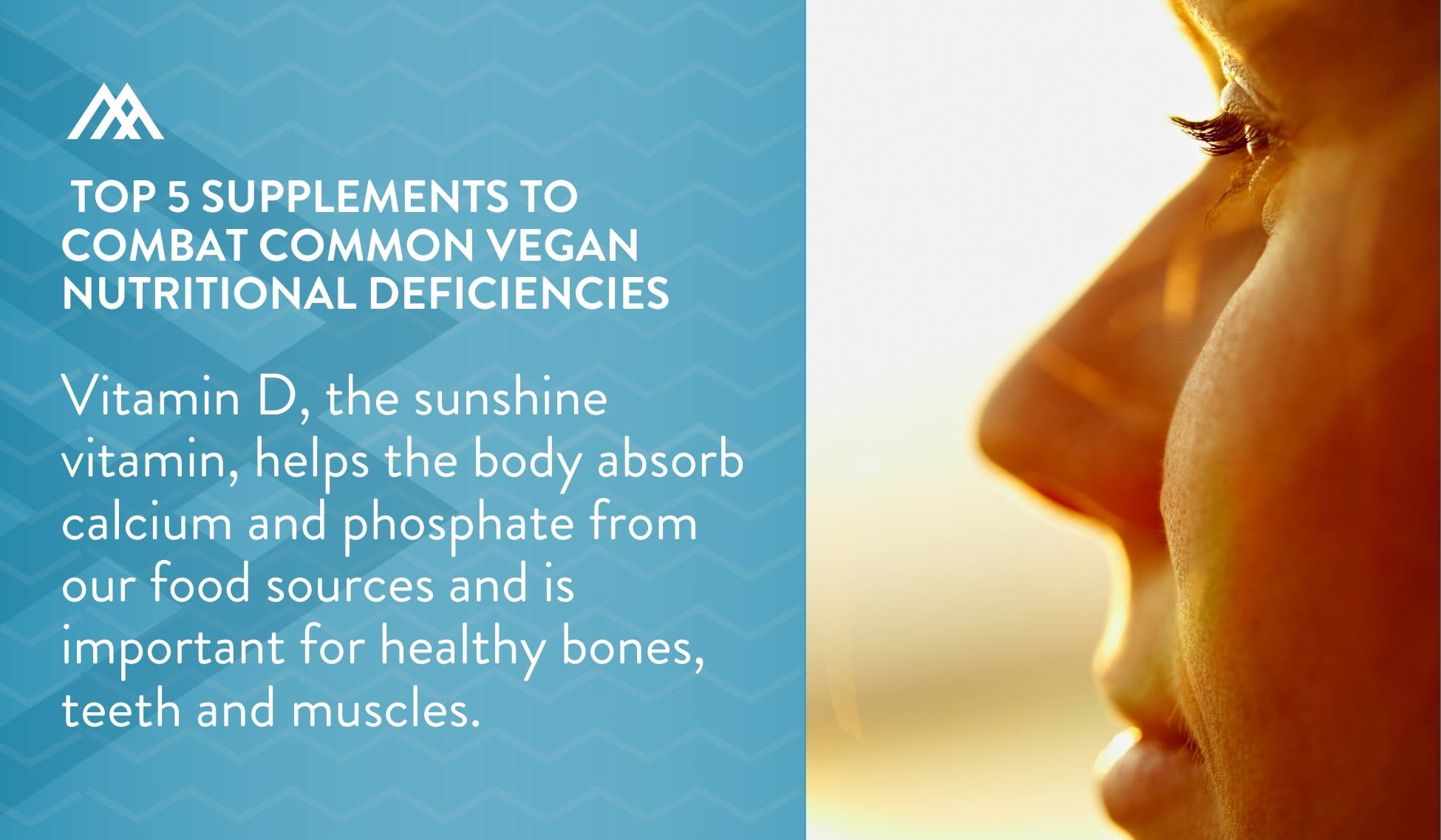 "Sorry boss, gotta step outside for a vitamin D break." We've actually heard of people replacing the smoke break with a vitamin D break, as it is known as the sunshine vitamin! Vitamin D helps the body absorb calcium and phosphate from our food sources. These minerals are important for healthy bones, teeth and muscles. Vitamin D is easily obtained from sun exposure, so long as one lives in a warm climate and doesn't have skin-cancer concerns. Luckily it doesn't take much sun exposure to juice up your vitamin D production.

It's difficult to say exactly how much time is needed in the sun for someone to make enough vitamin D to meet their body's requirements. This is because a number of factors can affect how vitamin D is made, such as skin color or how much skin is exposed. Most people in the northern hemisphere can make enough vitamin D after being out in the sun daily for short periods during spring and summer months. Exposed forearms, hands, and/or lower legs that are free of sunscreen during the optimal hours of 11am to 3 pm, will accomplish the desired effect.

Healthline.com recommends stepping out into the sun for about 10 to 30 minutes three times a week, if possible, with the caveat that people with darker skin may need more sun exposure than people with light skin, to reap the same benefits. They also remind us to try to limit your sun exposure, as too much time spent in the sun can damage your skin, cause sunburn, and increase your risk of skin cancer.

However, for those with less outdoor time, such as those restricted by winter or who work nights, etc, getting enough sun exposure can be a challenge. Most folks don't give it much thought, as they can usually get plenty of vitamin D from dairy products. As a vegan, you or your loved one doesn't do dairy, so what to do?

Unfortunately, there are not many foods that naturally contain vitamin D, except maybe mushrooms not grown in the dark. If you're not lucky enough to have a sunlight-exposed mushroom farmer nearby, you'll have to settle for plant-based sources of vitamin D such as:

It sounds strange, doesn't it, to say we need something with the words "fatty" and "acid" in the name? In fact, there is a psychedelic rock band named “The Fatty Acids.” The leader of the band says he came up with the name while studying nutrition and thought it sounded funny! But as off-putting as eating an acid that is fatty may seem, the field of dietetics says they are actually required for good heart health. 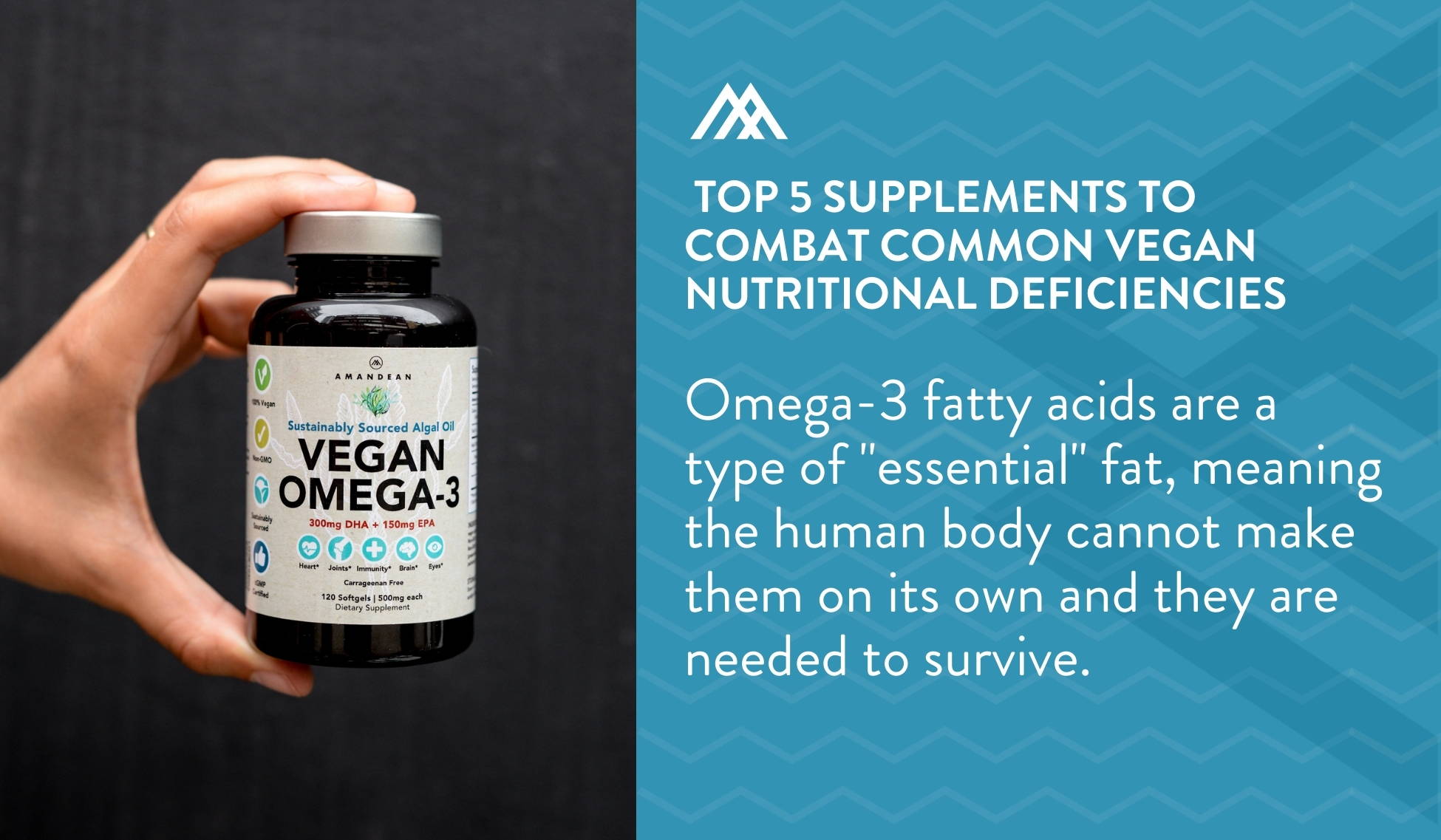 There are three kinds of omega-3 fatty acids:

Of the three, only ALA is found in plant foods. Studies indicate that EPA and DHA are more potent than ALA, but ALA provides the same heart health benefits listed above. Good sources of ALA are:

Algae or algae oil, is a vegan source of omega-3 fatty acids. Amandean’s Vegan Omega-3 is a 100% vegan source of this essential nutrient, sourced from algae oil and provides highly bioavailable EPA and DHA. Their marine algae are sustainably sourced and made from pure, non-GMO marine algae grown safely in a cGMP-controlled lab in the USA. It’s the perfect dose of DHA & EPA to boost your Omega-3s without the fish burps!

Phytic acid, or phytate, is considered an "anti-nutrient." It is found in many of the foods vegans eat for a balanced diet and hinders zinc absorption. Although zinc is found in many beans, legumes, whole grains, and seeds, so is phytate. However, it's easy to prepare vegan foods so the phytate is reduced. 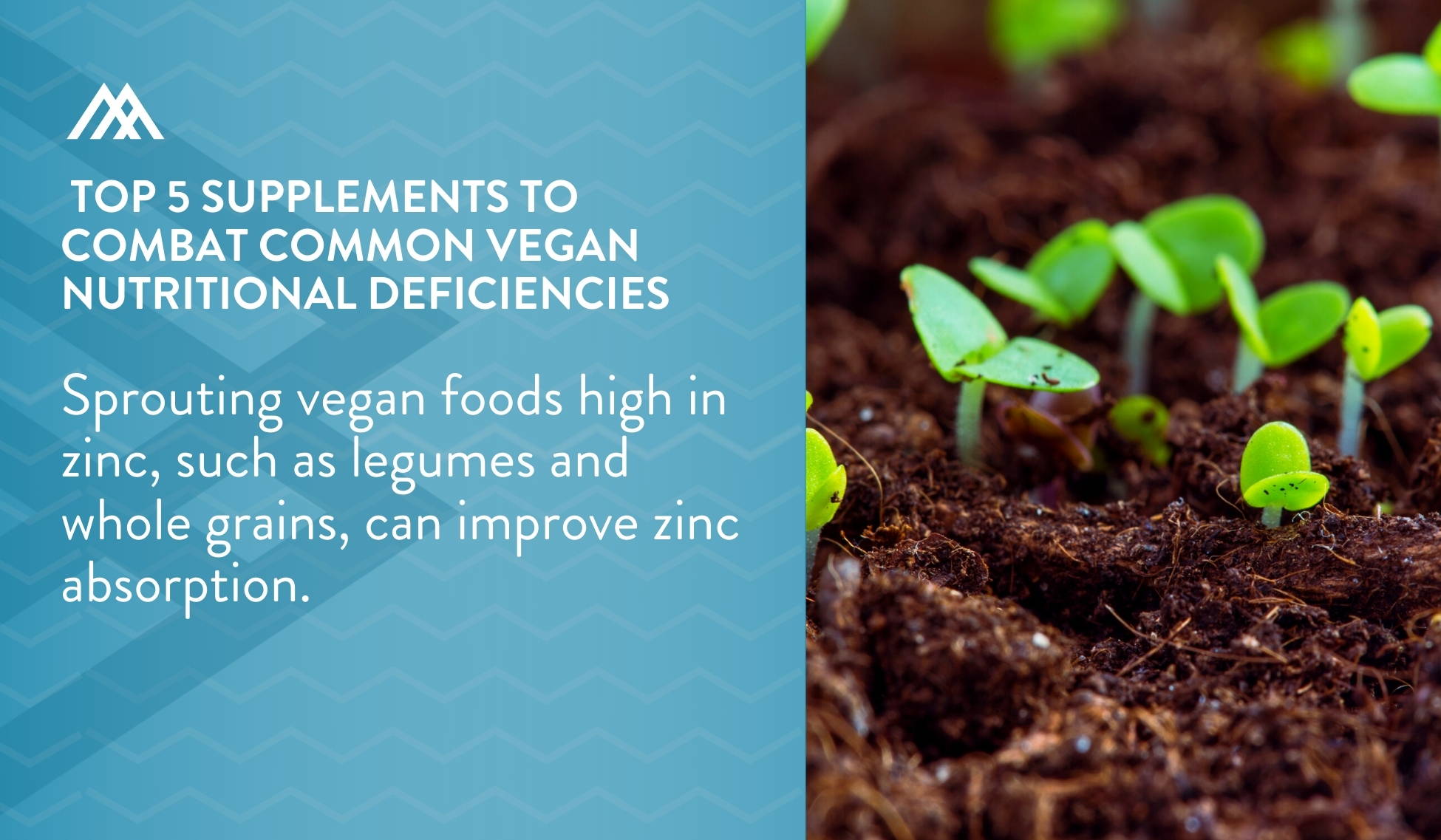 Along with vitamin B12 deficiency, not getting enough iron can lead to anemia and fatigue. Iron from plants is not as easily absorbed as iron from animal sources. However, eating a varied diet rich in whole foods should ensure enough iron.

To increase iron absorption from iron-rich foods like spinach and kale, combine them with iron-absorption enhancers such as vitamin C rich foods: citrus fruits and vegetables such as broccoli, Brussels sprouts, tomatoes, potatoes, or green and red peppers. Drinking a glass of orange juice just after your meals will also help your body effectively absorb iron. 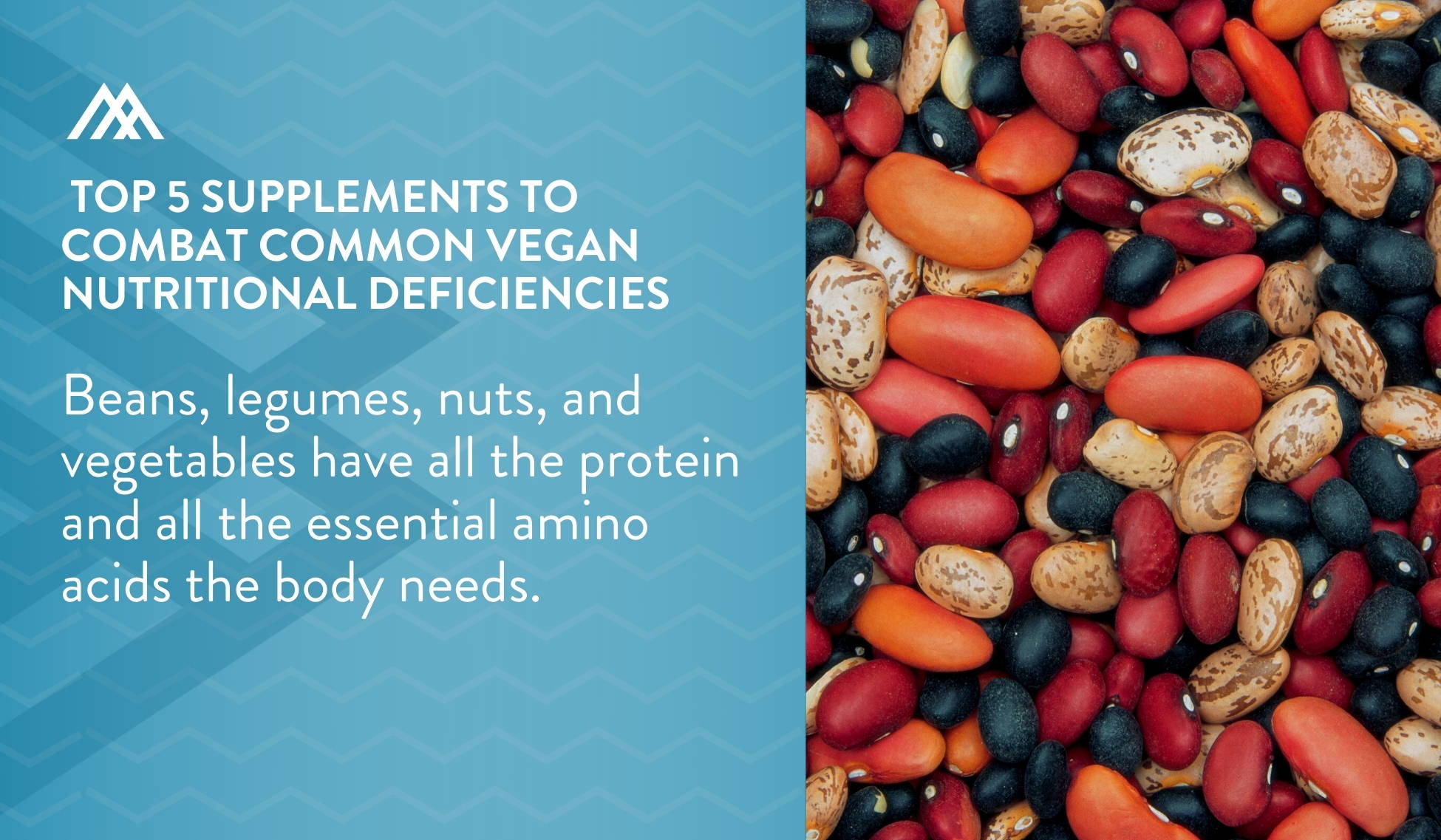 As they say in the vegan-o-sphere: "There are no vegan tire companies!" This is an expression meant to let you off the hook for not being 100% vegan. Unless you live on an organic farm with no contact with the outside world, your life is going to be touched by something that traveled by car or truck on those non-vegan tires. The truck driver that brought the veggies to market probably had a leather wallet or shoes, etc.

In other words, whether you or someone you love is vegan, for health reasons or as a matter of personal choice, aiming for "Level 5," or perfect veganism isn't practical. However, with diligence, planning, and supportive friends and family, there's no reason why you can't live well on a plant-based diet. The health benefits of a vegan diet are innumerable. If you are still concerned about getting the right nutrients, consult a dietitian or any of the many good sources of information online such as The Vegan Society, Healthline, or WebMD. According to Harvard Medical School, 27% of women have brittle nails. Brittle nails are more than just a cosmetic flaw or annoyance. On top of the pain and risk of infection, one's nail health can often be a sign of overall health. If you're struggling with brittle nails and want to find natural solutions, or are looking to learn what could be the cause, continue reading! Disclaimer: This is an article discussing how to manage the common side effects of the COVID-19 vaccines. This is not an article debating vaccines. As the number of COVID-19 vaccination rates increases, so too does the number of people feeling totally wiped out the next day. For some, the Covid vaccine was nothing more than a prick in the arm and slight soreness in the days that followed. Other recently vaccinated people experienced flu-like symptoms for 24 hours or even more. Whether your vaccine appointment is set or you're weighing your options and looking for ways to bounce back after getting "the jab", here's what you need to know. We don't typically think of inflammation as a good thing, but it actually plays an important role in the body. The trouble is, inflammatory foods, autoimmune disorders, free radical exposure, and more can send inflammation skyrocketing and underlie major diseases such as heart disease, diabetes, Alzheimer’s disease, and even depression. Here's why inflammation should not be ignored and what you can do now to avoid complications later.