Fear of losing one's hair is right up there with fear of public speaking. We can avoid public speaking, but can't as easily avoid every form of hair loss. A staggering half of men and a quarter of women over the age of 50 experience hair loss. Unfortunately, age and genetics are not the only conditions whose side effects include hair loss.

Hair loss can actually be caused by many different things, including medications, hormones, or lifestyle choices. Many of life's stressors, like illness, emotional trauma, overly restrictive dieting, and hormonal changes caused by pregnancy and menopause may cause hair loss, according to the American Academy of Dermatology. But so can certain hairstyles, fungal infections, overly-tight hats and ponytails, habitual hair-pulling, STDs, and being slowly poisoned. (If you're an international spy and slowly losing your hair, be sure to have your arsenic and strychnine levels checked!)

Autoimmune disease is another common offender responsible for hair loss. Unlike age-related hair loss, autoimmune hair loss affects over 20 million Americans under the age of 50. With these types of conditions, your immune system attacks your body. This leads to many symptoms, some of which are extremely unpleasant. One of the systems that can be attacked is the process of hair growth. Just as very poor nutrition can starve the hair follicles of the nutrients and energy needed for hair regrowth, so too can autoimmune conditions. 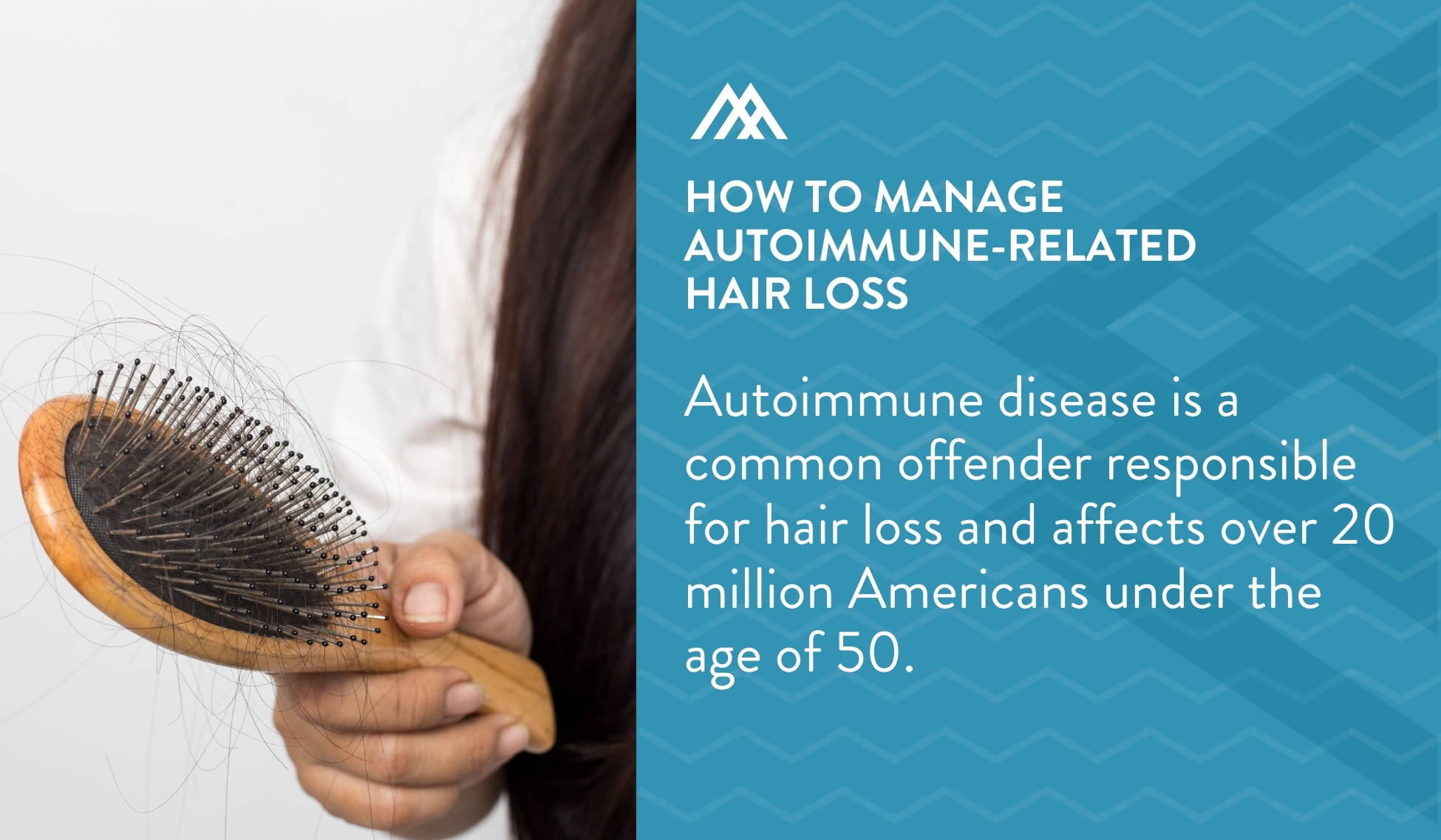 Hashimoto's Disease: Also known as “chronic lymphocytic thyroiditis,” Hashimoto's is the leading cause of hypothyroidism, affecting up to 2% of the population. This thyroid disease causes the gland to fail to produce enough of the thyroid hormones that regulate metabolism and the hair regrowth cycle. Thyroid-related hair loss is subtle, involving your entire scalp rather than more obvious patches of hair loss. In other words, your hair will appear thin and sparse all over. People often first notice their thinning hair when it begins to collect on their hairbrush or in the shower/sink drain. There may also be changes in their hair's texture, becoming dry, coarse, or easily tangled. This type of hair loss is often reversible.

Since there is a strong association between Hashimoto’s, alopecia areata and celiac disease, a gluten-free, probiotic-enhanced, iron-rich diet may help promote hair regrowth in some Hashimoto’s patients. 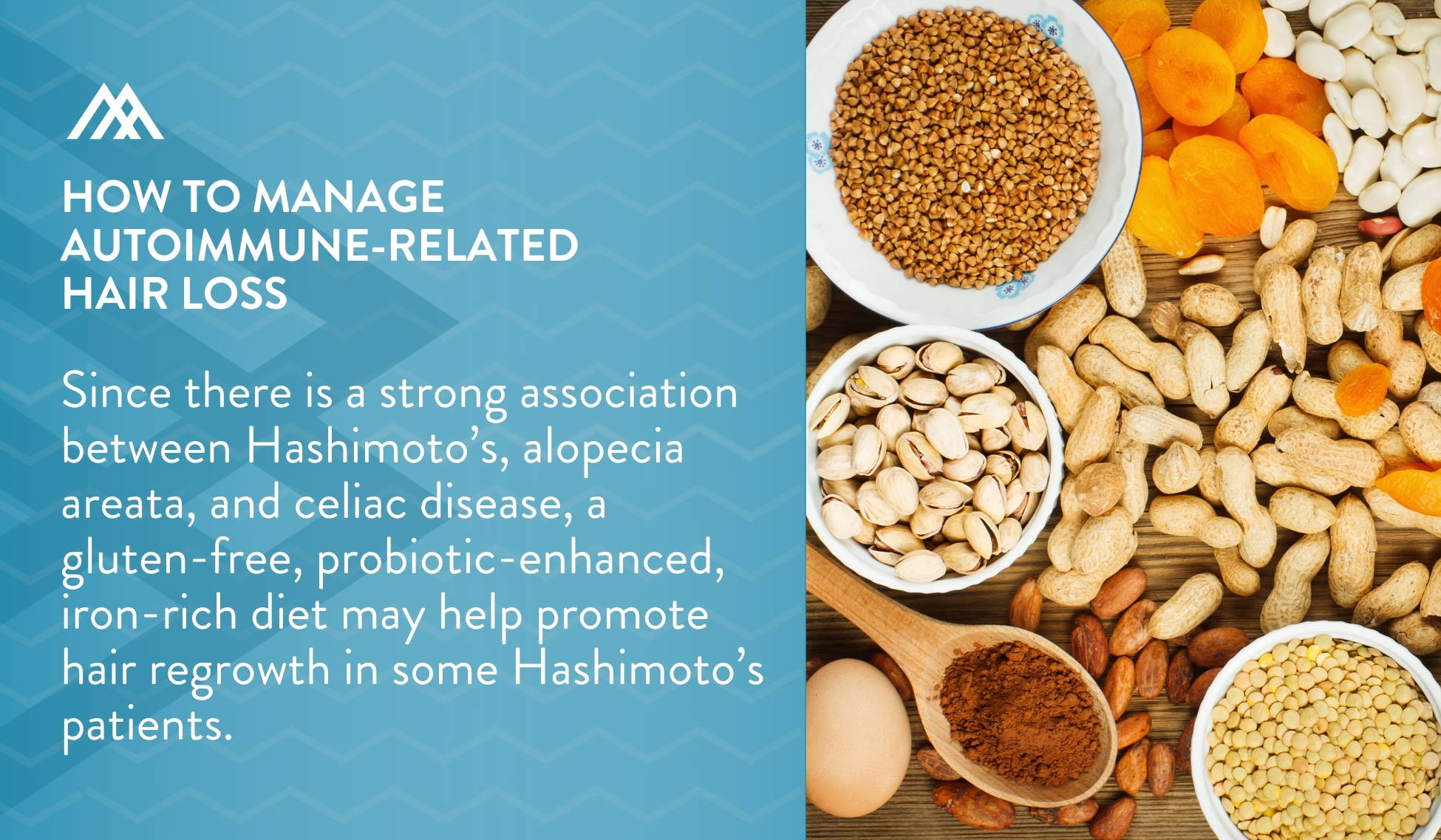 Graves' Disease: This is another disorder that causes a disturbance in the thyroid. Unlike Hashimoto's disease, Graves' disease causes hyperthyroidism, or an overly productive thyroid gland. Antibodies bind to the surface of thyroid cells, stimulating them and overproducing thyroid hormones. This speeds up many body's processes and, besides hair loss, may lead to such symptoms as:

Your doctor can order tests to definitively diagnose Graves' disease.

Alopecia Areata: This is the most common condition that results in hair loss, affecting an estimated 6.6 million people in the United States. It is characterized by patches of hair loss. In the majority of cases, hair falls out in small patches around the size of a quarter. For most people, hair loss is limited to no more than a few bald spots. However, in some cases, it can be more extreme leading to the complete loss of hair on the scalp, alopecia totalis, or, in extreme cases, the entire body, alopecia universalis. Although this condition affects people of all ages and genders, most cases actually occur before the age of 30. 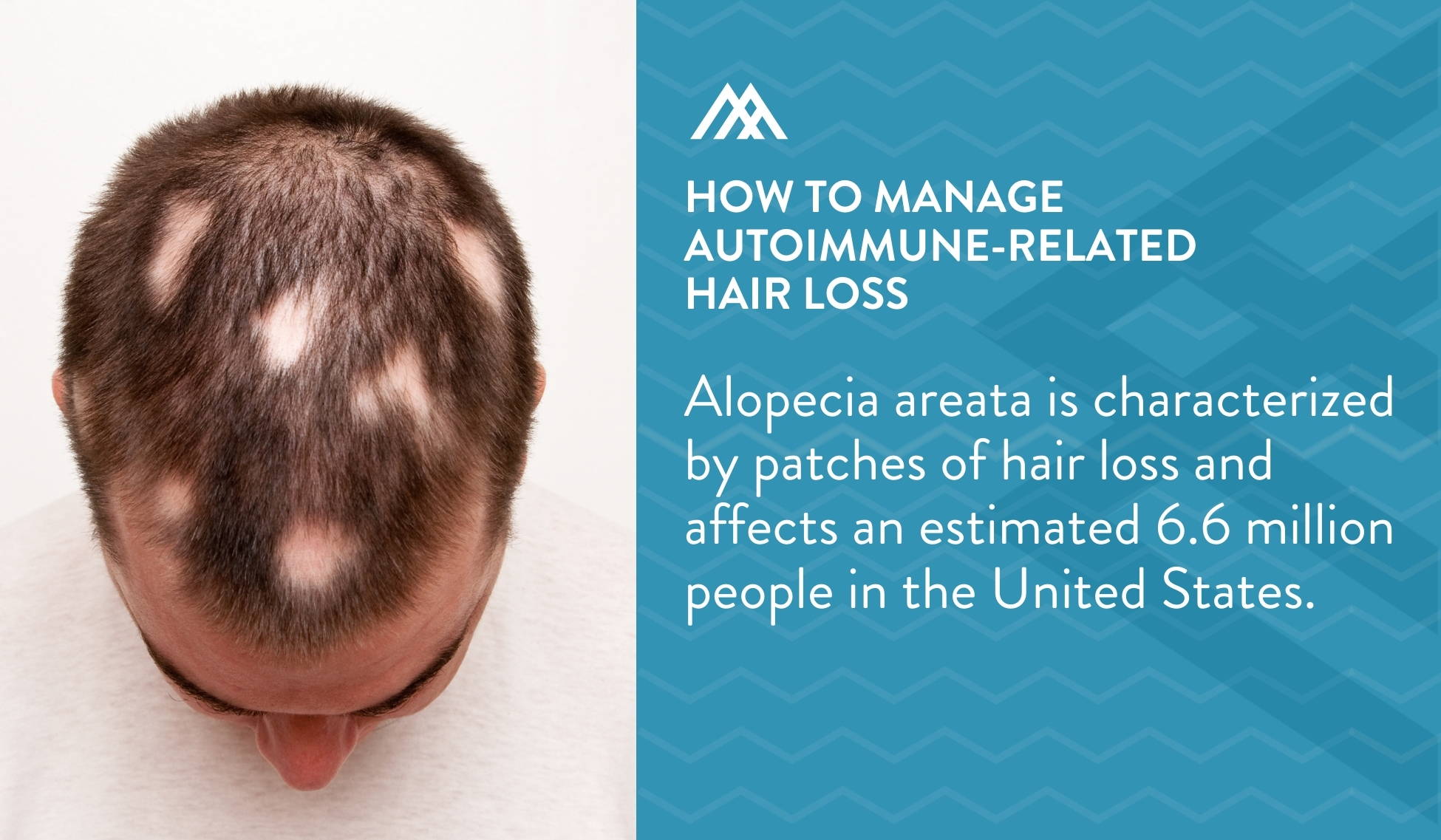 Unfortunately, there is no FDA-approved treatment for alopecia areata, but there are some treatment options. Some doctors recommend injections of corticosteroids into the scalp or platelet rich plasma (PRP) treatment. These treatments, along with topical applications of over-the-counter minoxidil, have shown efficacy in some folks with alopecia areata.

Lupus: Systemic lupus erythematosus (SLE) is the most common type of lupus. An estimated 1.5 million people in America live with this chronic autoimmune disease. Inflammation caused by lupus can affect many different body systems and organs, including the joints, skin, kidneys, circulatory, brain, heart, and lungs. The inflammatory response can lead to a wide range of symptoms including fatigue, headache, painful joints, anemia, abnormal blood clotting, and hair loss. Hair loss occurs when antibodies infiltrate the hair follicles, causing the hair shaft to be rejected by the body and fall out.

During periods of remission, some hair may grow back. However, if any scarring has occurred in the follicles, the loss may be permanent. Managing your symptoms can lead to hair regrowth. Healthline recommends these tips to reduce hair loss in lupus sufferers: 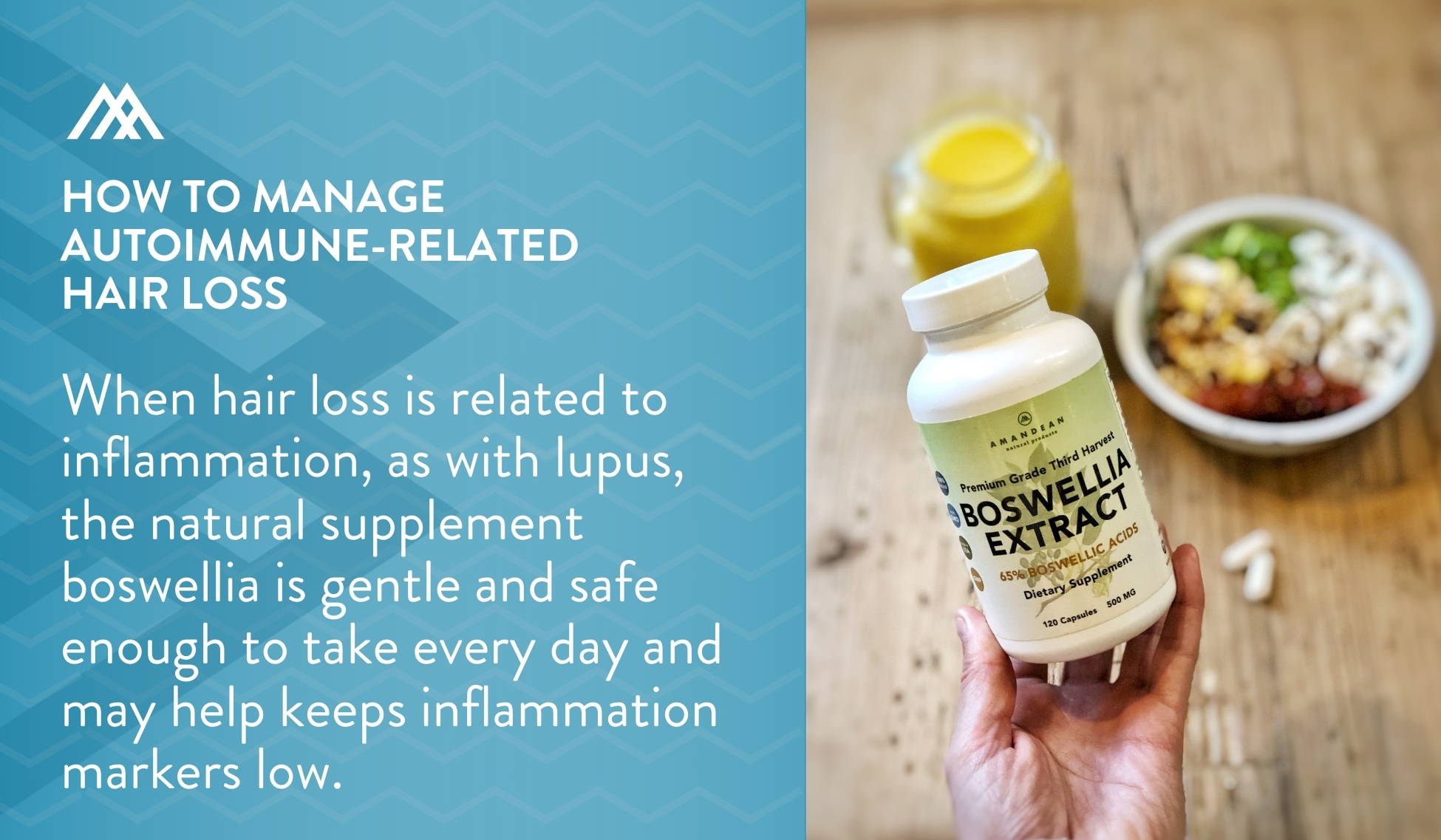 Psoriasis:This skin condition, which affects around 7.4 million people in the United States, most often occurs on the elbows, knees, and knuckles, but can also occur on the scalp. It happens when your immune system turns over skin cells too quickly, causing red, scaly patches and silver scales known as plaques to form on your skin’s surface. At least 50 percent of people with plaque psoriasis will develop scalp psoriasis, according to the American Academy of Dermatology. Scalp psoriasis can be mild or severe, with cases ranging from light scaling to thick plaques. The condition can appear anywhere on the scalp in the form of a small patch, or it may cover the entire area.

Psoriasis usually does not cause large amounts of hair loss, but it can cause the hairs' diameter to change and cause breakage. And luckily, it is treatable and hair regrowth is possible. Healthline recommends these tips:

Your doctor may recommend any number of over-the-counter products like a steroid cream or medicated shampoo. He or she might also prescribe a medicated topical treatment that contains steroids, vitamins D and A, or antimicrobials, or even an oral medication if indicated. Steroid injections have been shown to have very positive effects on some psoriasis sufferers as well.

Crohn's Disease and Inflammatory Bowel Disease: Patients with one autoimmune disease are at an increased risk of developing another, like Crohn's disease. This condition, which leads to inflammatory bowel disease (IBD), can also cause hair loss. We mentioned earlier that an inflammatory response can affect hair growth. We also mentioned that poor nutrition can too. It's easy to see that a condition that causes poor gastric performance would limit the nutrients needed for hair growth. What's not always obvious to outside observers, is that the symptoms of IBD cause sufferers to limit food intake, exacerbating nutritional deficiency.

Those who have Crohn's disease have certainly heard the trope mentioned at the beginning of this blog: that "hair loss is the least of your worries." In fact, the US National Institutes of Health reports on this very phenomenon, stating that very little data about hair loss in sufferers of Crohn's disease is available, even though, anecdotally, they know it is a common symptom. The symptoms of IBD are rather grim, so doctors and family members can be forgiven for focusing more on those while dismissing your dismay/anxiety over your hair loss. However, with all the other losses and limitations you experience, you'd like to have control over some things in your life. And as we said earlier, our hair is a huge part of our identity.

With that said though, the dearth of hair loss related research leaves little in the way of advice for treatments. And since every case of Crohn's disease is complex and unique, your doctor and dietician should be a major part of any treatment plan. Nutritional supplementation appears to be the place most healthcare providers focus on. 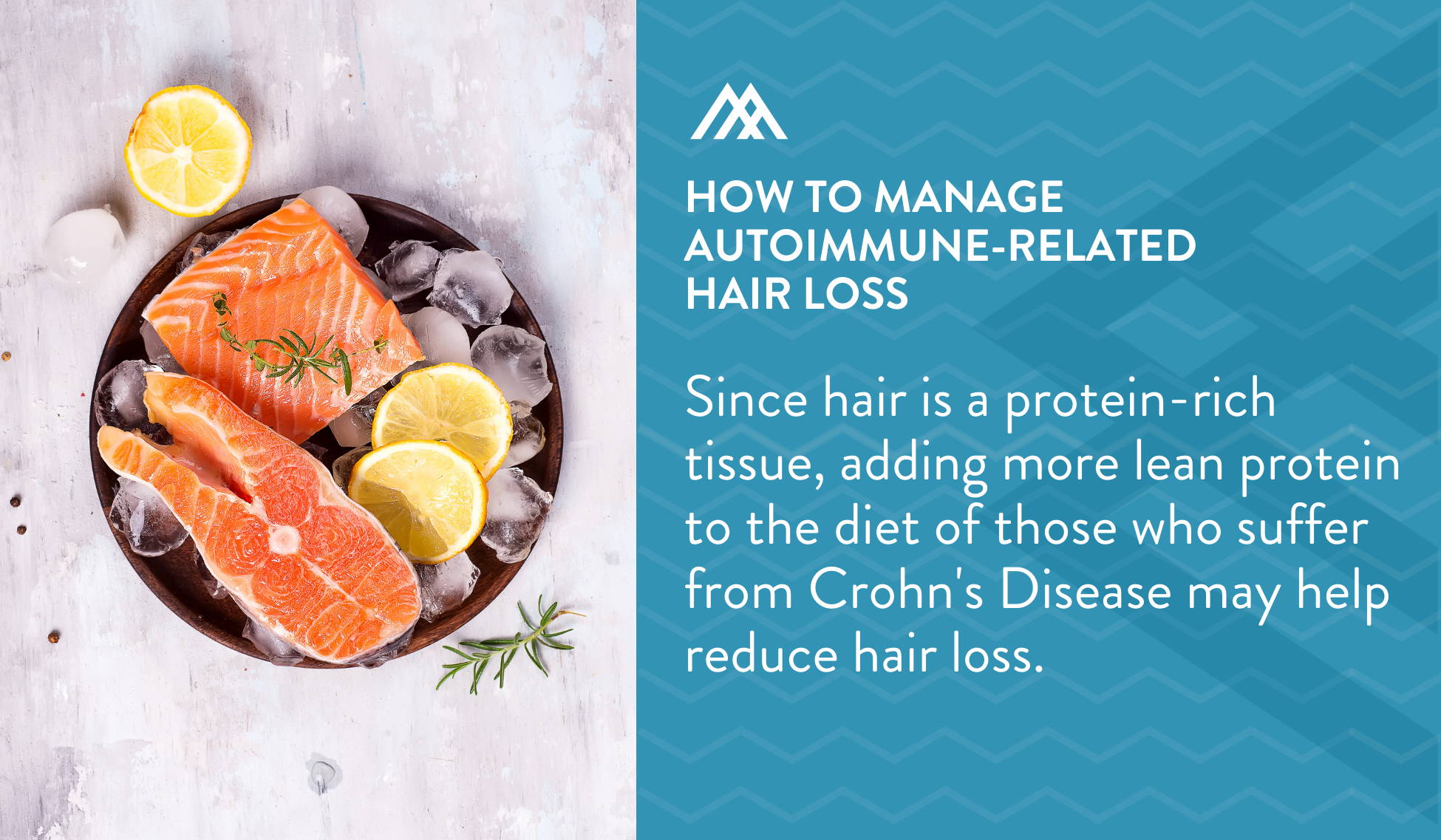