Disney star Hannah Montana, style icon, and award-clad, music artist Miley Cyrus is, in a word, iconic.On top of using her influence to fight injustice facing homeless youth, LGBTQ youth, and other vulnerable populations (check out her nonprofit The Happy Hippies), Miley is an animal lover. From 2013-2019 Miley was a devout vegan. She even got a tattoo on her body that nods at the vegan logo. Her now ex-husband Liam Hemsworth also followed a vegan diet. They were a power couple! That's why the vegan community was shocked when she declared on The Joe Rogan Experience that she was ditching veganism for health reasons.

On the podcast, Miley and Joe were discussing their diets and the influence they have on their physical and mental energy. That's when Miley shared that she is no longer following a vegan diet. Why? She needed more omega-3s! Miley said, "I was vegan for a very long time and I’ve had to introduce fish and omegas into my life because my brain wasn’t functioning properly." 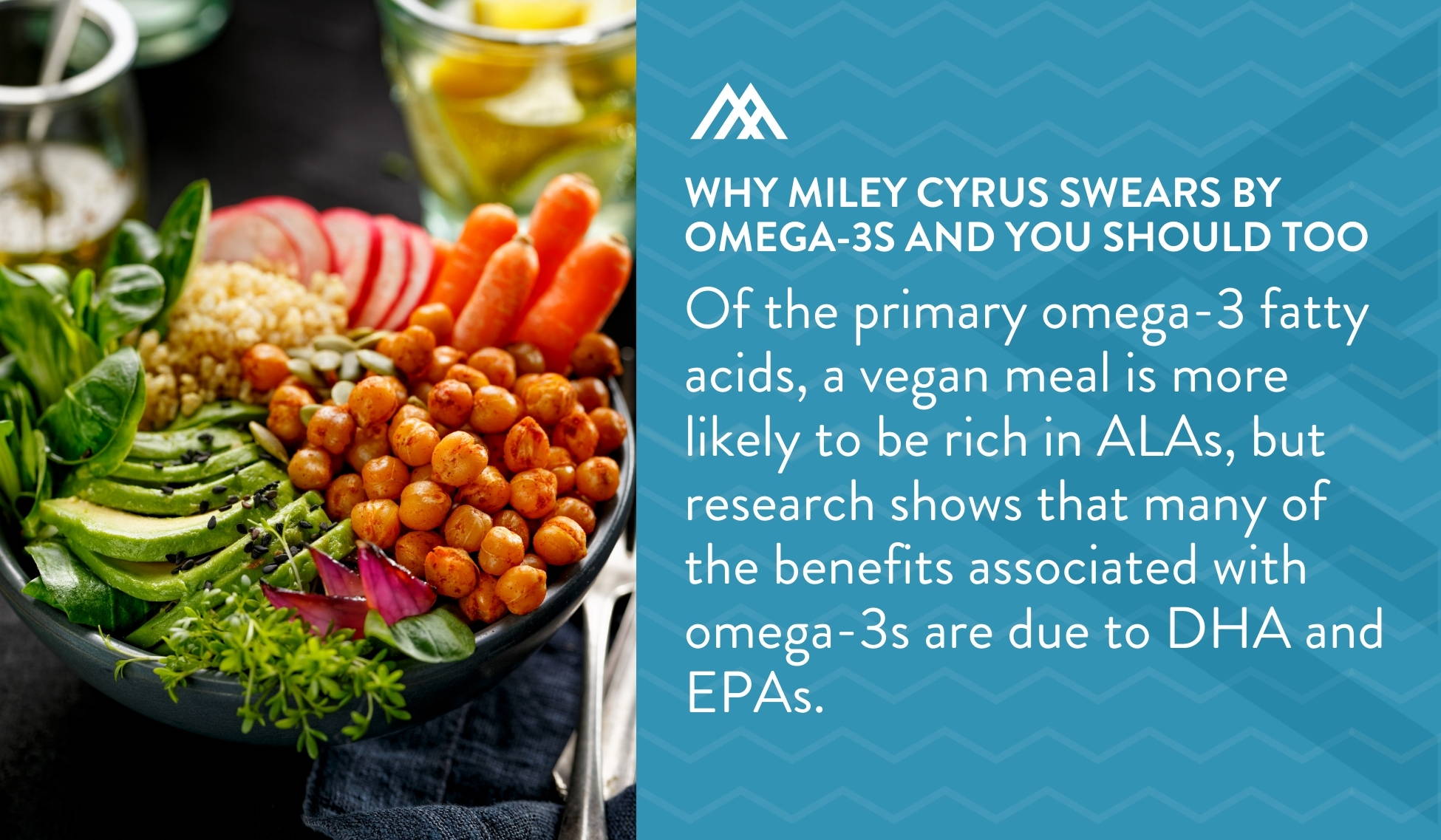 Miley said that while touring and following a vegan diet, she felt as if she was "running on empty" and feeling "pretty malnourished". Today, she defends her departure from veganism saying that she now eats according to what's right for her body and brain. Now that Miley has adopted a pescatarian diet and begun getting her omega-3s from fish, she said she feels "much sharper", even though she doesn't love the idea of eating fish. She has also reintroduced gluten to her diet after following a lactose and gluten-free diet for years.

Okay, so it's now 2021 and this news is no longer trending on social media or making headlines. But looking back on this "controversy" it reveals some misconceptions about veganism, and also some true gaps in the vegan diet that need to be filled through supplements. We're 100% for taking omega-3 supplements to sharpen your brain and body's functioning, but we now know that you don't have to ditch veganism to do so. It's true, you can get the best of both worlds.

How Omega-3s Affect Your Brain Functioning

Omega-3s are wildly influential on the brain and body. They support the structure of cell walls throughout the body and provide energy to the heart, lungs, blood vessels, immune system, eyes, brain, and more. They can help to prevent anxiety and depression, reduce symptoms of ADHD in children, reduce the frequency and intensity of mood swings, improve sleep quality, and slow down age-related cognitive decline. 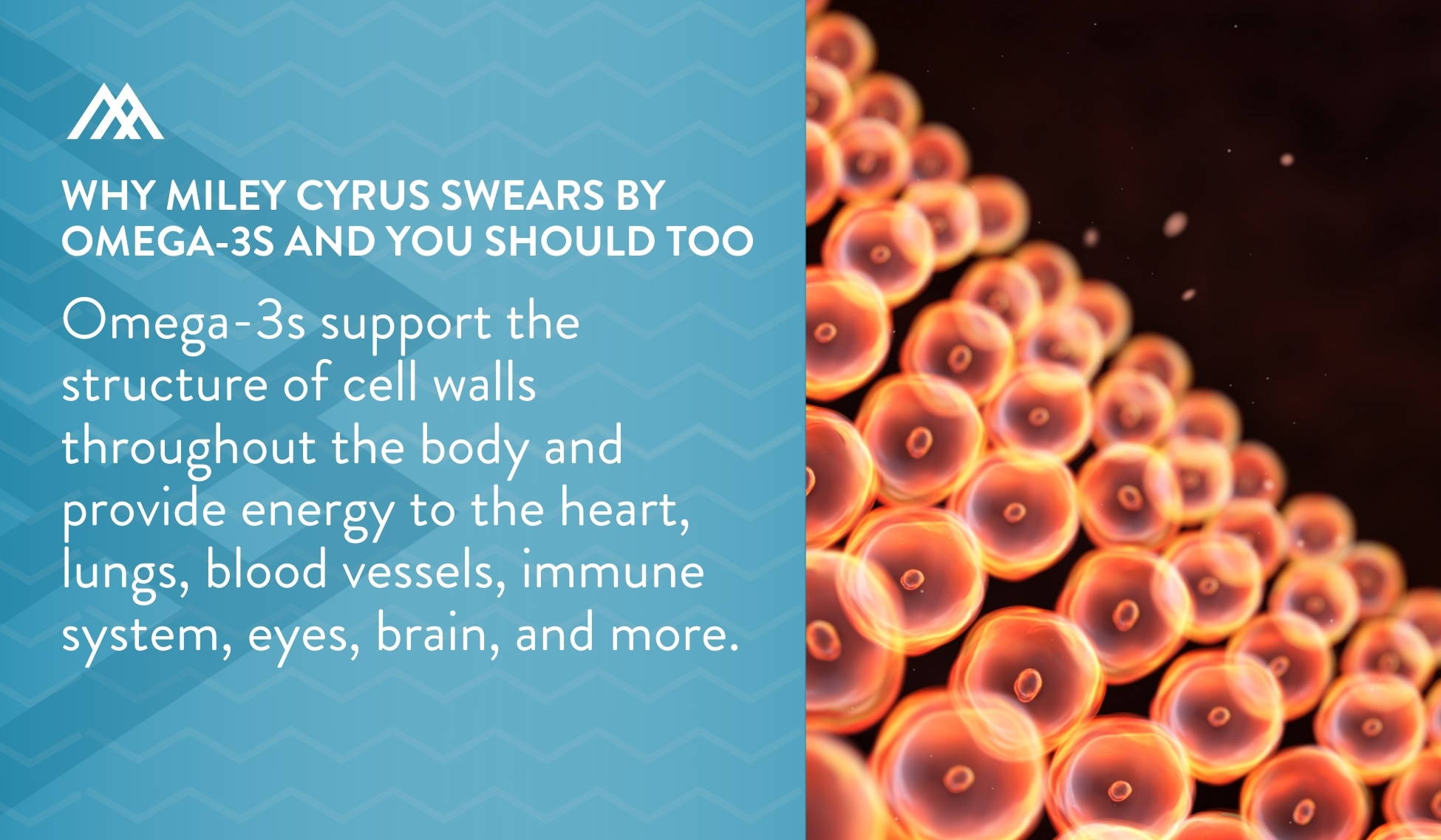 There are three main types of omega-3 fatty acids: EPA, DHA, and ALA. EPA and DHA can be found in fatty fish, whereas ALA is primarily found in plant sources like nuts, seeds, and whole grains. A vegan meal is more likely to be rich in ALAs, but research shows that many of the benefits associated with omega-3s are due to DHA and EPAs. While humans can convert ALAs into the other types, this conversion process is very inefficient. Additionally, the vegan diet often lacks many other vitamins and nutrients that are required to make this conversion happen.

This is where Miley's dilemma stemmed from. Due to a lack of omega-3s, she was feeling the brain fog set in and generally feeling less sharp and energized. She even went on to say "But when it comes to my brain … you can’t be vegan and be this quick.”

Miley received harsh criticism for this decision because the solution was right in front of her -- vegan omega-3 supplements. Before, fish and krill oil were the only reliable supplement form of omega-3s. Today is a different story. Vegan omega-3 supplements can be made from algae. These supplements are not only vegan-friendly and 100% cruelty-free, they're also more sustainable. High-quality algal-oil supplements even contain both EPAs and DHAs, so they're suitable for any diet. We believe in individualized health and doing what's right for your own mental and physical well-being. No shade at Miley! But if you are facing a similar dilemma and want to boost your brain functioning without sacrificing your values or diet, you've got options! 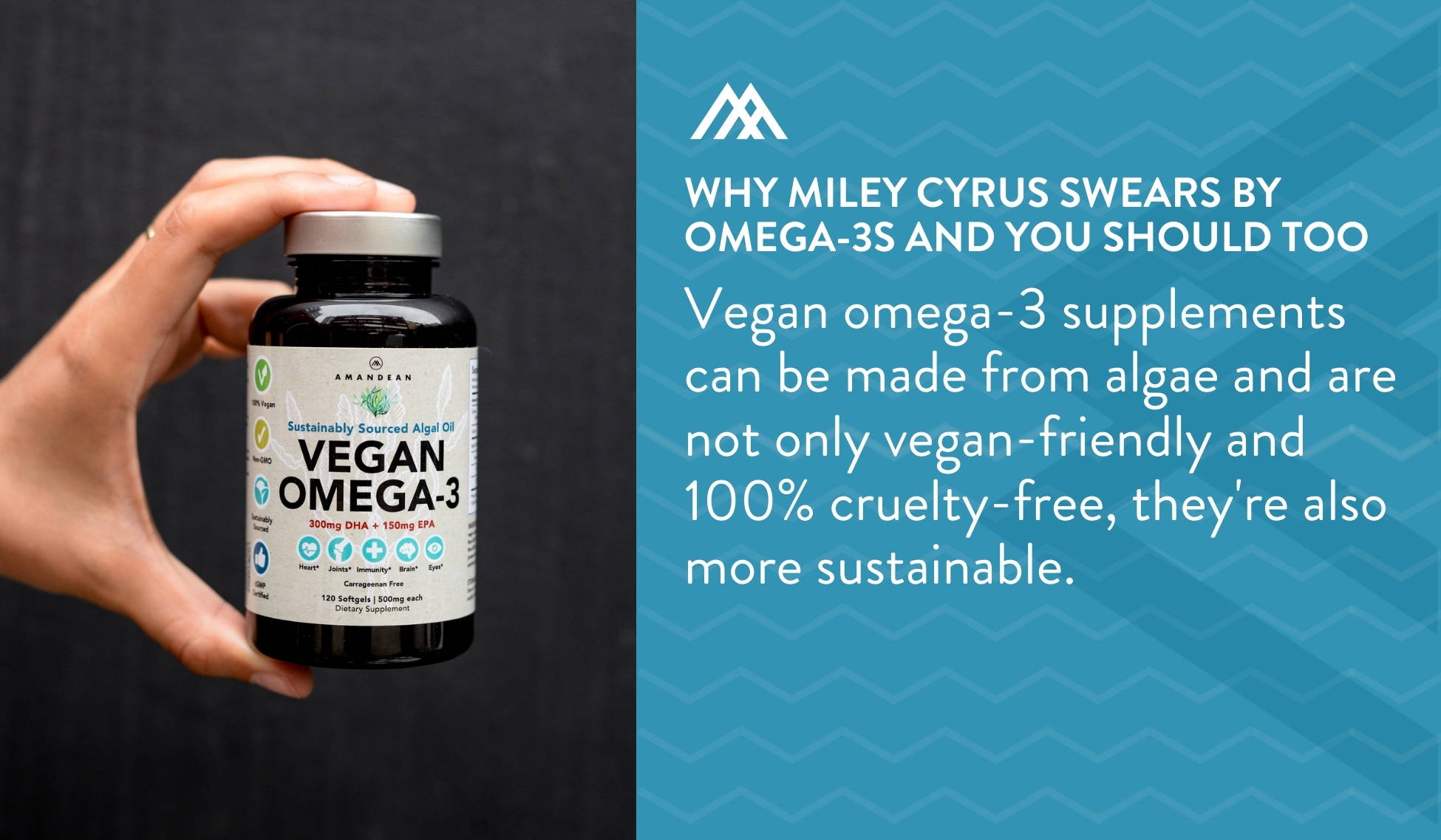 Miley isn't just a singer, she is a performer. While she's belting out energetic pop hits and somber songs, she's dancing and climbing through elaborate sets. This year, just before she performed at Super Bowl LV, a video went viral of her running on the treadmill while practicing her Super Bowl performance. That's some serious stamina! Needless to say, Miley follows a pretty strict workout routine. While we know from social media that she is a devout yogi, interviews with some reporters and fitness instructors gave us more of a glimpse into her fitness routine. 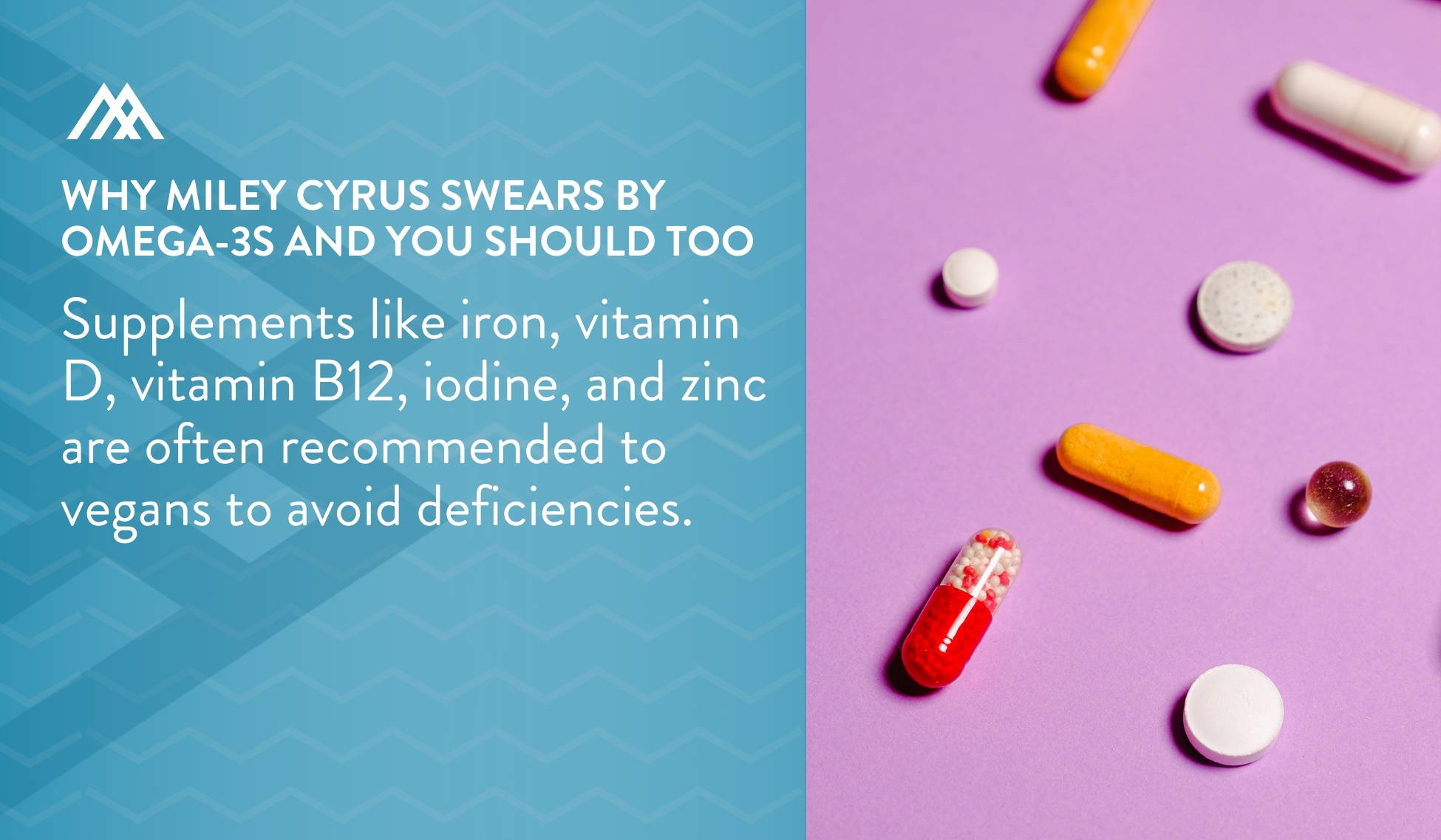 So far, this is what we know about how Miley keeps her mind and body sharp. At any rate, if you're vegan, try speaking with a dietitian to find a fool-proof diet plan that suits your needs and fills in all the gaps! Supplements like iron, vitamin D, iodine, and zinc are often recommended to vegans to avoid deficiencies. Lastly, if you don't want to incorporate any animal products into your diet, but want to boost omega-3 levels, consider adding an algae-based vegan omega-3 supplement to your morning routine! You don't have to be a Hollywood elite like Miley to support your health and wellness in a dramatic way. By following Miley's no-fuss exercise plan and being mindful about filling vegan nutritional deficiencies, you can get the best of both worlds too!

It is no secret that the cost of living has sky-rocketed, and dealing with the consequences of inflation is no walk in the park. While you may be forced to make wiser choices and cut back on certain luxuries, we believe that self-care and optimized nutrition should not be compromised in the process. Does your collagen routine fit into your new and improved shopping list? Keep on reading to learn how to get the most out of your collagen products on a budget.
Read More