Do You Bruise Easily? Grass-Fed Collagen Peptides Can Help

Do you ever get mysterious bruising that leaves you a bit confused about where or how you got it? It happens to all of us. If you're anywhere near as clumsy as I am, you won’t stress too much about inexplicable bruising since you’ve learned to live with the consequences of tripping over things and bumping your arms and legs on a daily basis. However, if you notice that you’re bruising easily, this could be a sign of underlying issues regarding your health that should be addressed - not to mention the fact that you simply don’t want to be black and blue all the time. Fair enough!

Aesthetically speaking, if you’re on a continual hunt for a concealer with the most coverage, or you’re hesitant when it comes to showing your skin due to bruises, it may be time to address the problem from the inside instead of trying to temporarily disguise it on the outside. Unsurprisingly, nutrition can definitely play a role. All-natural superfoods such as a premium Collagen Peptides supplement can aid in minimizing bruising, which is of little wonder considering collagen’s irreplaceable role in your skin’s health.

All you need to know about bruising 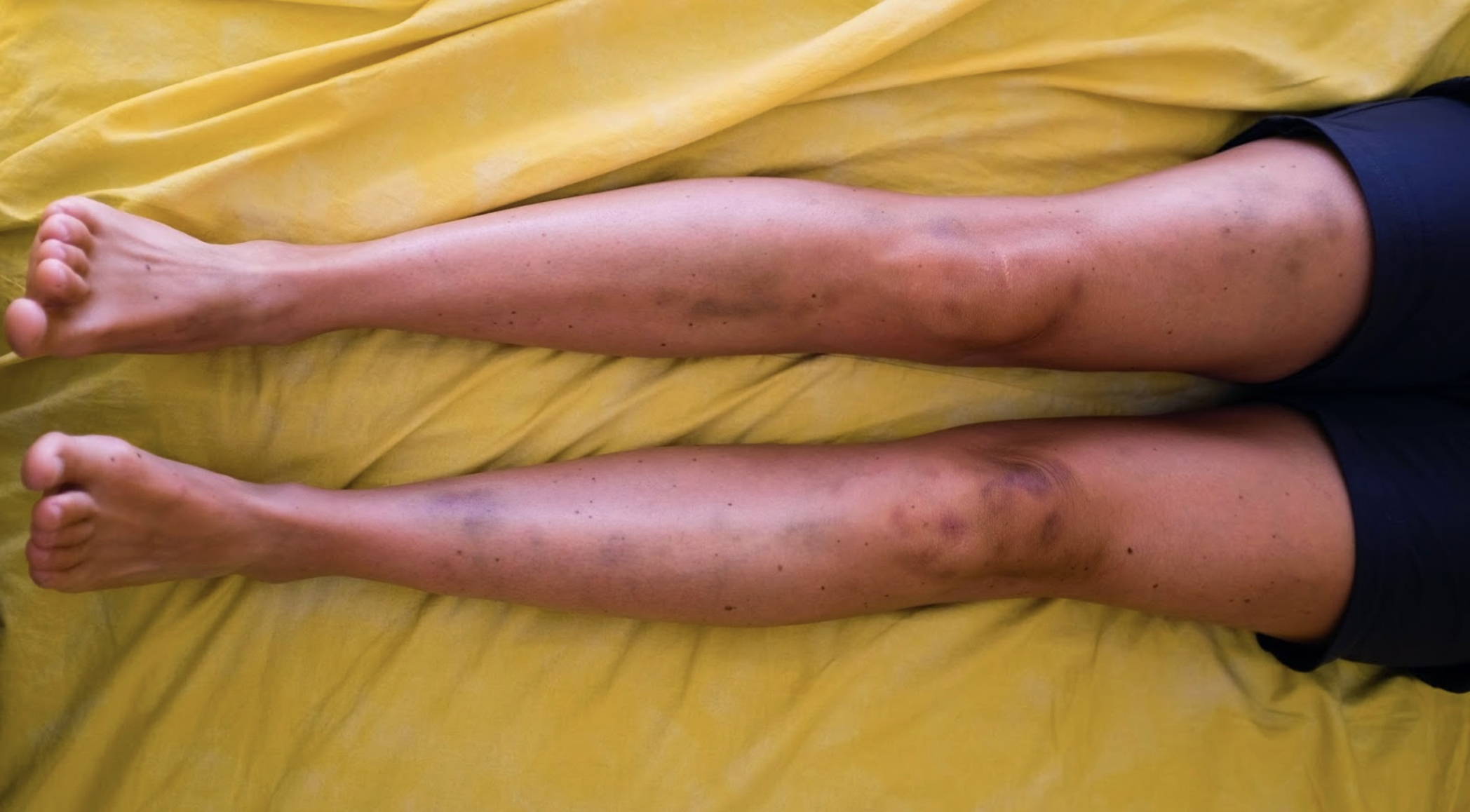 Bruises, also referred to as contusions, are considered to be skin injuries which manifest themselves on the surface of the skin in the form of discoloration. What causes visible skin discoloration is actually damaged blood cells underneath the surface of the epidermis (thin outer layer of the skin), resulting in black, blue, or sometimes multi-colored marks on the body. Usually, once bruising appears, it will have a reddish tone while still “fresh”. Depending on your skin quality and the depth of l the damage, the intensity of bruising will vary after a few hours, once the bruise turns black and/or blue. Once you begin to heal, you’ll most often notice a green, yellow or brown tint to the bruising. Not so pretty!

Well, the most common and obvious trigger of any injury to the skin is a traumatic impact - a fall, or blow per say. In case of a traumatic injury, your small blood vessels break, resulting in red blood cells leaking into the surface of the skin - hence the color of the bruise.

If we disregard the possibility of a physical event or fall, what else could be causing you to bruise? First and foremost, it is important to address the fact that not everyone’s skin is the same in terms of its quality. Yes, some people are more prone to bruising than others, due to genetic factors, pigment, sun damage, certain health conditions, and poor nutrition, as well as age.

If there is a genetic tendency for bruising easily in your family, you can expect to have the same issue. This is especially true if you have pale skin. While being pale doesn’t increase the chances of bruising, it certainly does make the bruises appear more prominently. In addition, UV rays, being extremely aggressive towards the skin, affect the resilience of the skin, compromising its quality and allowing for bruises to appear more easily. Therefore, sun-damaged skin generally bruises more easily.

Health conditions such as purpuric dermatosis and blood disorders can also manifest themselves through severe bruising, as a result of blood leakage and the inability of the body to properly clot blood. Furthermore, taking medication including aspirin, antiplatelet drugs, and anticoagulant medication may jeopardize blood clotting, due to its blood thinning properties, further increasing the chance of bruising.

When it comes to nutrition, we already know that poor diet choices can take a toll on every single aspect of our health and physical appearance. A decrease in vitamin C has been shown to result in more bruising, which is precisely why vitamin C formulas that offer high bioavailability, such as a Liposomal Vitamin C supplement, are considered the best solution for making sure you get enough, as well as an effective dose. What’s more, vitamin C is a necessary element when it comes to natural collagen production, which is crucial for preserving skin quality, including minimizing bruising. 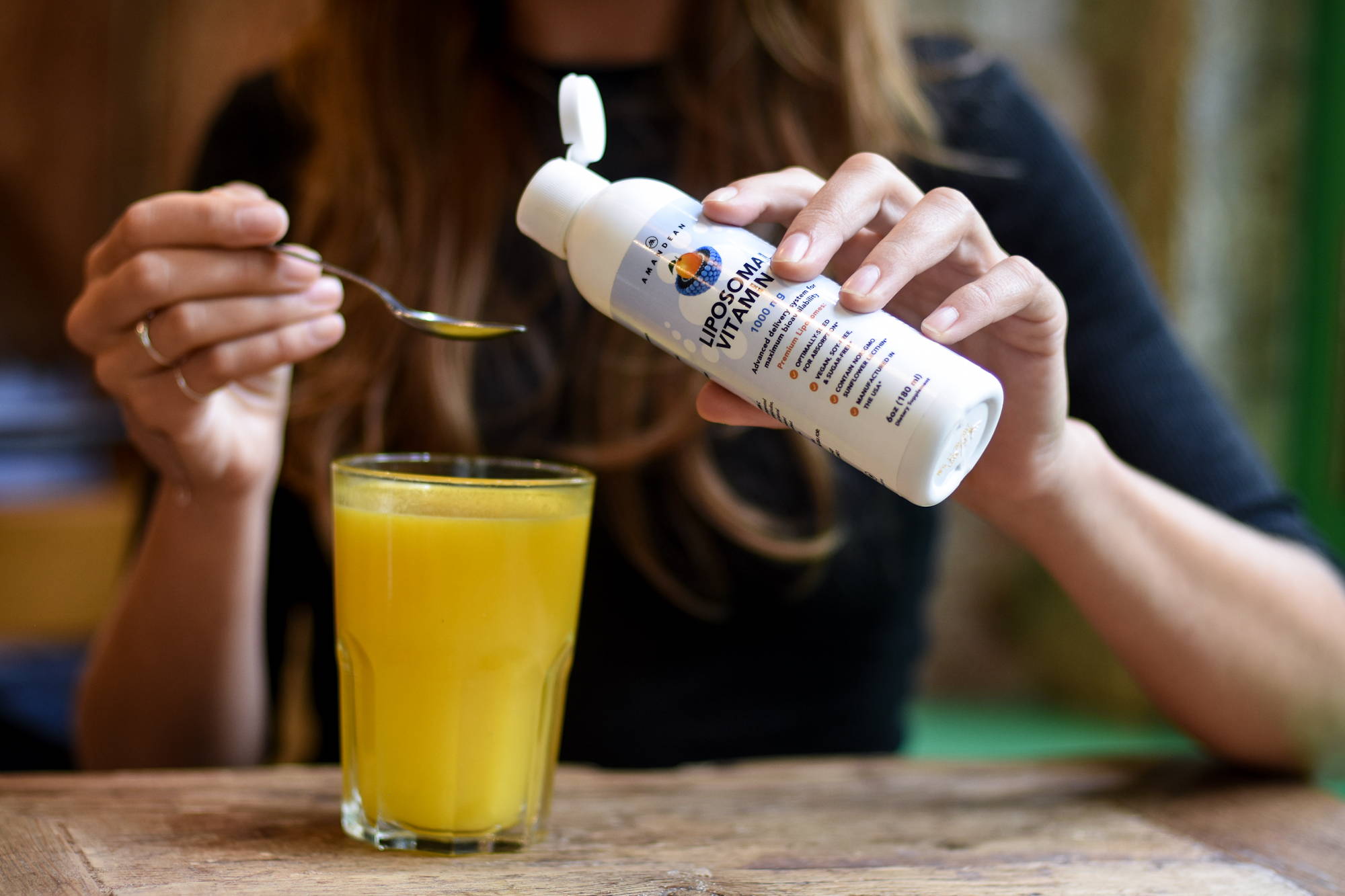 One of the elements of our physical appearance that most quickly reveals our age is the appearance of our skin. What actually happens beneath the surface of our skin as we age is a decrease in collagen production. After the age of 30 our body is unable to produce the same amount of collagen as it used to (approx. 1.5% less per year), which results in the skin becoming thinner and losing its elasticity, thus increasing the likelihood of bruising.

While collagen seems to be on the tip of everyone’s tongue as of late, it has certainly earned its reputation in the world of nutrition and beauty. Collagen is a structural protein found in pretty much every single part of our bodies, including muscles, bones, ligaments, joints, blood vessels, and of course - skin. Collagen not only has a structural role but also a protective one, shielding organs and providing flexibility to joints and tendons. 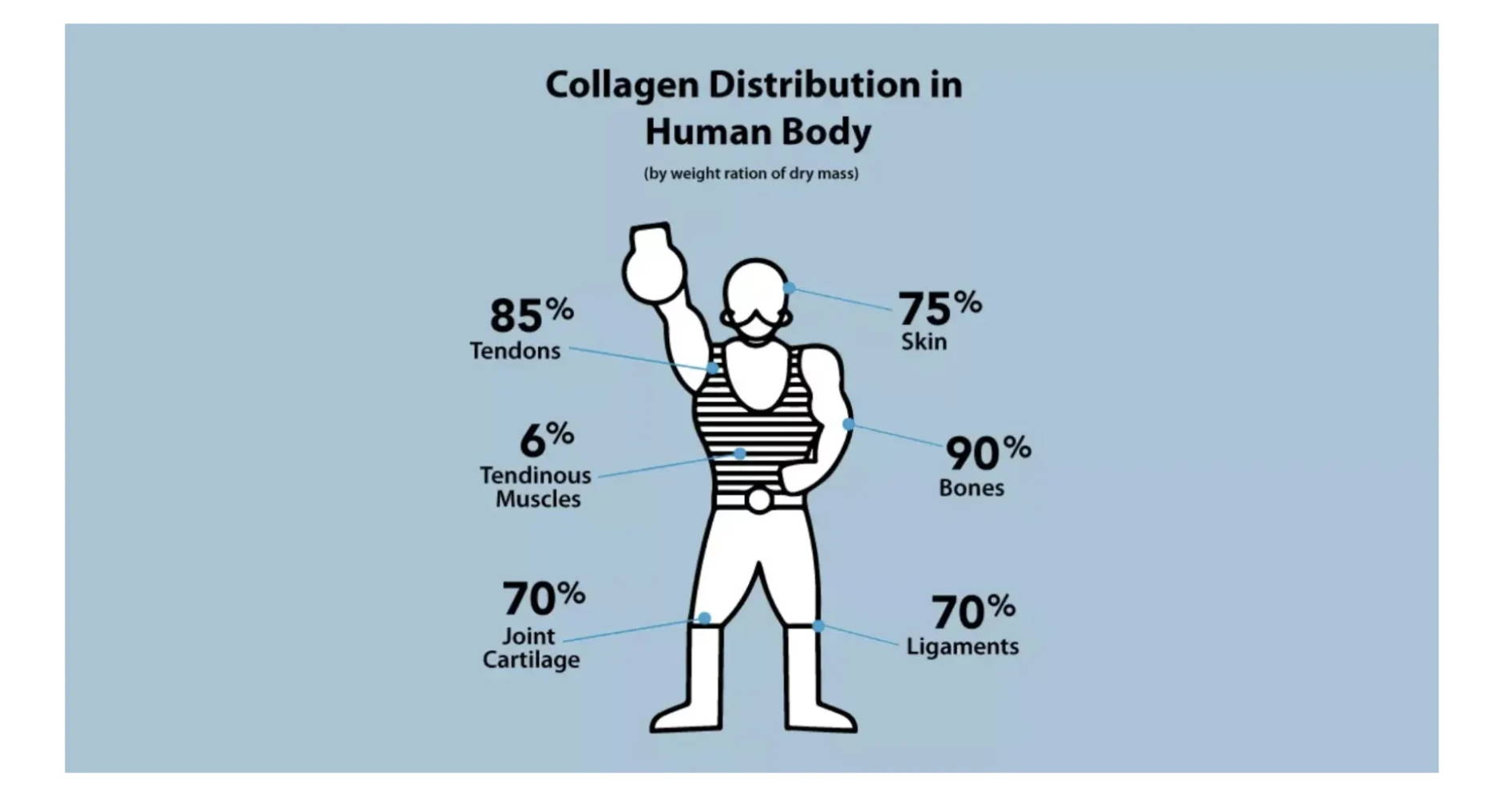 So, how does the concentration of collagen in our bodies affect the skin’s structure and the probability of bruising? Our skin consists of three layers: the epidermis (thin outer layer), dermis (middle protective layer), and the hypodermis (the deepest skin layer consisting of fat cells). The epidermis may be the frontline defense of our skin, but it is, in fact, the dermis that is responsible for its protection.

The fibrils found in the dermis, represent the glue that holds the skin’s structure together and protects the skin’s vessels, which are made of collagen. It is the thickness of the fibril layer, i.e. the collagen concentration in the dermis, that determines the level of the skin’s protection in case of an injury. According to a study, “defective collagen compromises capillary and skin elasticity”, which may result in bruising. Therefore, it is safe to conclude that the level of bruising depends upon collagen concentration, as well.

Our bodies are able to manufacture collagen naturally, but unfortunately the quantity isn’t often enough to manage those of us who bruise easily. Various factors, including injuries, stress, and the numerous pollutants that we’re constantly exposed to in modern life, negatively affect our collagen supply; and with a decrease in natural production that comes with aging - supplementation is simply a necessity to maintain adequate levels.

In order to be able to produce the structural protein, collagen, the body needs an adequate supply of amino acids, including arginine, glycine, leucine, and glutamine, to name a few. Besides vitamin C, that is known to promote natural collagen production, amino acids are the fuel that powers this production. 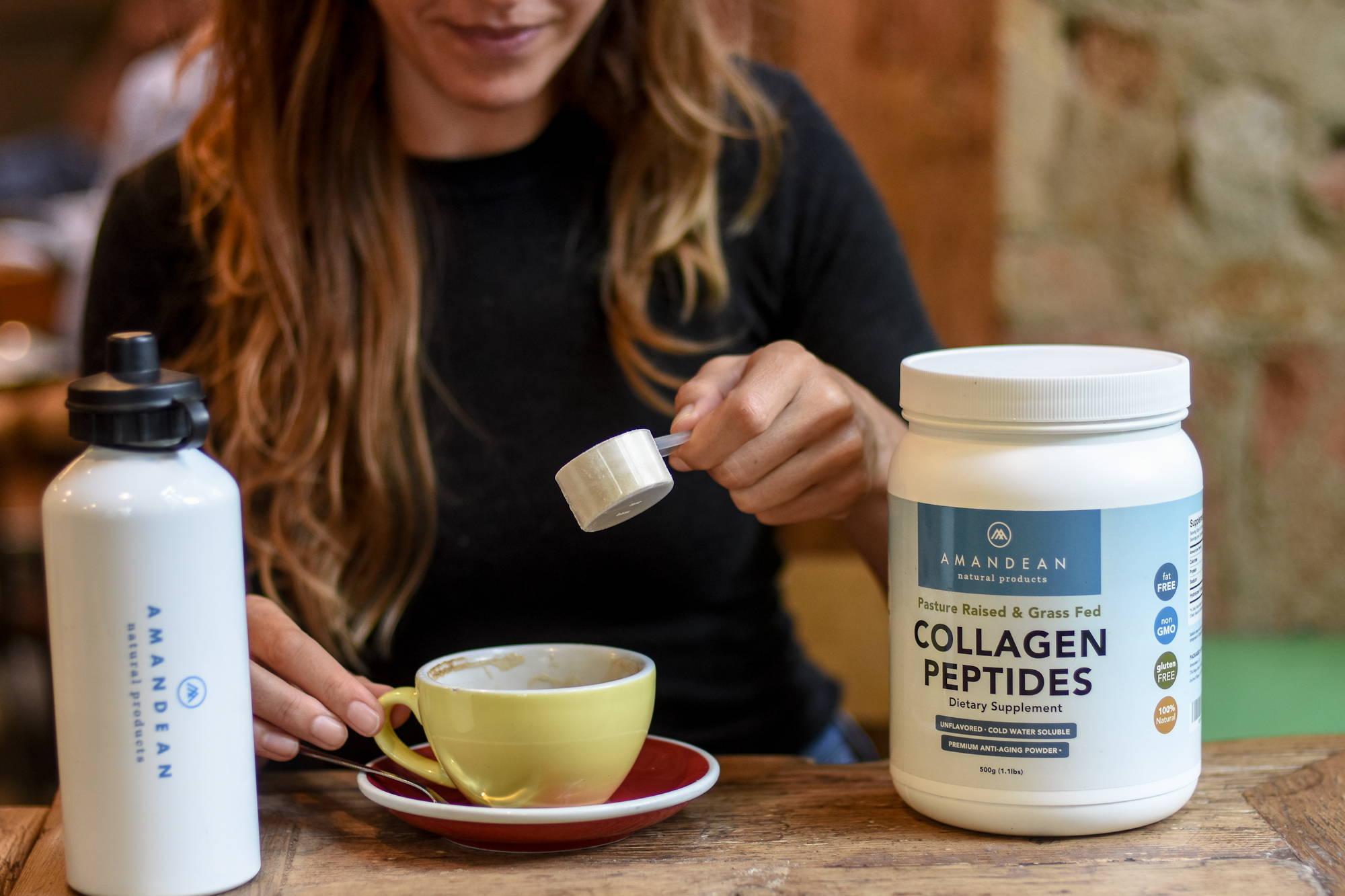 While proper dietary sources do contain a decent amount of necessary amino acids, we are often physically unable to take in the required amount, which is why a concentrated form such a collagen powder supplement, are recommended. Hydrolyzed Collagen Peptides offer a higher absorbancy in humans than other forms, which means that the maximum amount of nutrients are delivered straight into the bloodstream. One of the main benefits affects the skin, which is more protected and plump and has a lesser chance of bruising.

Aside from protecting the skin from bruising, collagen also has an important role in helping to  manage numerous chronic skin conditions, while Collagen preserving the skin’s vitality and youthful appearance thanks to its anti-aging properties. Discover all-natural supplements, including quality Collagen Peptides, in our online store.

Discover Which Of Amandean's Premium Non-GMO Collagen Superfoods Are Right For You. Maintain Youthful Skin & Age Gracefully. Get Them Today!

The results of botox treatments are very much visible, but unfortunately not permanent if not maintained. If you're looking to preserve that youthful, plump skin look, there are two options: to repeat the botox procedure every few months (which can get pretty expensive) or to invest in your skin health on a deeper level. What we mean by that is tackling the very composition of your skin with all-natural Anti-Aging Marine Collagen supplementation which promotes skin health, texture, hydration, and elasticity.

You'll often hear that the only bad workout is the one you didn't do - and we couldn't stress that enough. We all know that consistency is key, and knowing that our immune system can benefit from exercise as much as our physique, staying active is imperative. In this article, we've decided to keep the story short and offer you a simple yet effective at-home workout that requires absolutely no equipment at all. Provided by a certified personal trainer, Martin Ebner of Ebylife, who ensures that your homebody can be a hot body afterall.

Mercury retrograde might be one of the most feared astrological episodes throughout the year, and for a reason! Astrologists claim that Mercury's direction can greatly affect several areas of our day-to-day life, including technology, communication, and wellness. While we can't really tell you how to deal with crashed computers or fix a relationship gone sour, we've got some supplement solutions that will help you to feel more balanced and stay strong during this tumultuous period.